Less than a year after being fired by CNN and being accused of sexual misconduct, TV newsman Chris Cuomo will once again be anchoring a prime-time newscast, marking one of the fastest exonerations yet in the post-#metoo era.

And based on a promotion dropped last week by his new employer – Nexstar’s fledgling cable and streaming news service NewsNation, it’s a full exoneration: an 8 p.m. time slot branded “Cuomo.”

A promotional “trailer” for his new show shows a soft-focused Chris Cuomo emerging from the other end of a long corridor, and shows non-identifiable snippets of him moving through the newsroom as audio of various NewsNation staffers intone:

“Take a breath for a moment…”

“This is when we unite as a country…”

“We are getting new reports from our studio here…”

Culminating with a sharp-focused closeup of toothsome Cuomo and his own declaration: “Chris Cuomo, NewsNation.”

From what I can discern, it is the quickest comeback story yet and may signal a new “half life” for disparaged media personalities that just a few years ago would have scuttled careers, especially for high-profile TV news anchors.

Not surprisingly, Nexstar’s promo and press release don’t make any mention of Cuomo’s history, and the truth is that other than being fired by CNN, nothing has been proven about the other allegations made of him, so maybe it’s just that the media celebrity marketplace is righting itself. You know, doing what America was supposed to do in the past: assuming someone is innocent until proven guilty?

So kudos to NewsNation for not just giving Cuomo a second chance, but leaning into it – and to a great extent, branding the cornerstone of NewsNation based on his personality.

It will be interesting to see if viewers follow suit. 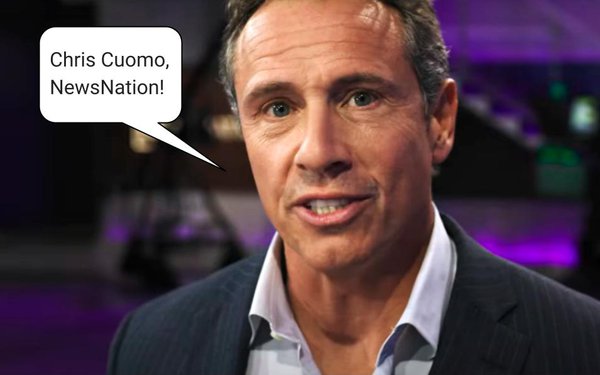