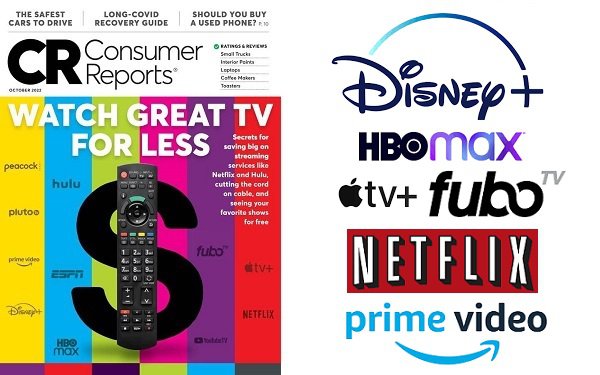 Consumer watchdog Consumer Reports is advocating subscription sharing and “service hopping” as strategies for streaming subscribers to save money on their monthly TV bills.

Service-hopping refers to the habit of many subscribers to sign up with a streaming service for a specific series or movie and then unsubscribe when the experience is over.

Also known as “churn,” service-hopping represents a subscriber-retention challenge for the streamers.

But Consumer Reports is not advocating for the streamers. Instead, CR is advising consumers that opting in and out of streaming subscriptions (since none of them have contracts holding a subscriber for a specific length of time) is a great way to chip away at monthly streaming costs.

“Save money by service-hopping,” counsels CR in the cover story of its October issue (pictured above).

“Many people sign up for streaming services to watch a particular series and then continue to subscribe even after they’ve finished every episode. It just becomes part of their monthly expenses, like a utility bill,” notes CR. “But that’s unnecessary because … you can cancel and sign up again.”

The practice is quite common, says CR. “Thirty-six percent of streaming customers are already 'service-hoppers'," the magazine reports, citing data from Parks Associates.

“It’s probably fine to let your daughter keep using your log-in when she moves to her first apartment, but Netflix might look askance at your sharing accounts with all 10 members of your book club.”

The cost of TV is mounting up for consumers, especially those who subscribe to multiple streaming services while continuing to also cling to their monthly cable subscriptions.

Other strategies suggested by CR for reining in TV subscription costs include choosing cheaper tiers such as the ad-supported tiers now offered by major streamers, and taking advantage of free streaming services such as Freevee, Pluto TV and Tubi.

This year’s CR TV cover story (an annual feature for the magazine) suggests plans for organizing streaming services according to specific viewer profiles such as the I-Want It All Viewer, the Sports Fanatic, the Bargain Hunter and the Movie Lover.

For the Movie Lover, the suggested streamers are Amazon Prime. Netflix, Criterion Channel, Fandor, Disney+ Bundle, and Kanopy or Hoopla.

CR even tested streaming devices and provides ratings for all of them. The device with the highest score: Nvidia Shield TV Pro. Retail price: $200.