Funeral For Queen Elizabeth Will Be Huge, Global TV Event 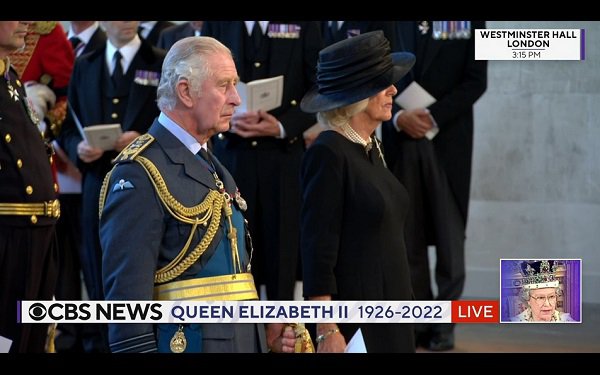 The live funeral of Queen Elizabeth II on Monday will take its place among the most-watched international TV events of all time.

Measurement of its audience will be difficult, although plenty of estimates -- accurate or not -- will emerge in its aftermath. Look for them to be in the billions.

Televised events such as this one, that rivet audiences both globally and domestically, are relative rarities or, at the very least, they occur infrequently.

Some are based on sudden news events. Others, whether sad or celebratory, are irresistible events for millions and sometimes billions.

The world watched Elizabeth’s coronation in 1952, and on Monday, billions will likely watch her funeral to share in the experience of saying good-bye.

The funeral is scheduled to start at 11 a.m. London time, which is five hours ahead of the U.S. Eastern time zone, meaning the event will start here at 6 a.m. eastern.

It is unnecessary to list all of the TV networks and news web sites that will air the event live because it will be seen on all of them. It will be impossible to miss.

Most of the news sites and networks are planning to begin their coverage several hours earlier in the morning before the official start of the service.

The earliness of the coverage will likely not have a huge impact on viewership. For an event such as this, people will plan to get up early.

But certain news events in TV history have drawn audiences on par with, or far larger, than these royal rituals.

Among them: Coverage of the assassination of President Kennedy in 1963, the Apollo 11 moon landing in 1969, coverage of the Munich massacre at the 1972 Summer Olympics, President Nixon’s resignation speech in 1974, the infamous O.J. Simpson Bronco chase in 1994, the O.J. verdict on October 3, 1995, and many more.

The audience for 1985’s international Live Aid concert has been estimated at 1.9 billion, although the accuracy of this tally and others like it that stretch into the billions are often disputed, or at least looked upon with skepticism.

Whether or not the audience estimates in the days following the funeral are credible or not, the funeral itself will be all that matters to that great portion of the world united in grief who will not be able to resist dropping everything to watch it.

For on Monday, Elizabeth II will be queen for a day, and for all time.