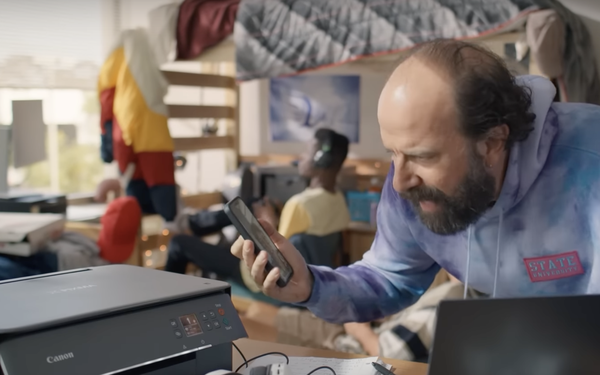 Brett Gelman, best known for his role on Netflix’s “Stranger Things,” stars in this spot as a very stressed man who is trying to print something.

In the ad, via McCann, Detroit, Gelman fields a call from his mother and explains that if he doesn’t get “this paper printed by 8, I’m gonna fail.” The mother then responds that Gelman has a Canon printer and he subscribes to the PIXMA print plan, a subscription plan to help Canon customers avoid running out of ink.

The mother then reminds Gelman to check his mail, which Gelman does to find a box labeled “PIXMA print plan.” Gelman then opens the box and says, “Awesome!”

Despite his age (Gelman is 45), he’s cast as a college student. In other ads, Gelman plays a ventriloquist, a yoga studio owner/instructor, and a graphic novelist.