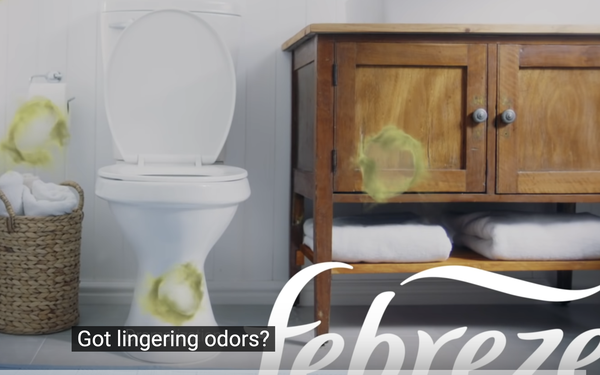 Is there a difference between “eliminating” and “reducing” odors?

The National Advertising Division recommended that P&G discontinue 19 “express” and two “implied” claims—many of which include references to the ability of Febreze products to “eliminate” odors.

One claim being challenged is that “Febreze Air eliminates odors in an instant.”

P&G rejected the NAD’s decision and filed an appeal with the National Advertising Review Board backed by evidence that included Difference from Control “sensory testing.”

P&G also cited a “complete absence of any material level of consumer complaints” about Febreze odor-elimination claims in more than 20 years.

The NARB agreed with the NAD that air-freshener claims asserting that a product “eliminates” odors “should be held to a level of support high enough to show actual elimination or absence of odors rather than simply odor reduction.”

As seen in this spot, Febreze claims that Small Spaces “continuously eliminates and prevents odors.”

P&G disagreed with the NARB decision and said it was “disappointed that the NARB discounted the science and real-world experience of consumers and went against established precedent” regarding odor-elimination claims.

“Nonetheless P&G will take the NARB’s guidance into account when developing claims in this category.”

According to the NARB, P&G “will comply with” the organization’s recommendations.