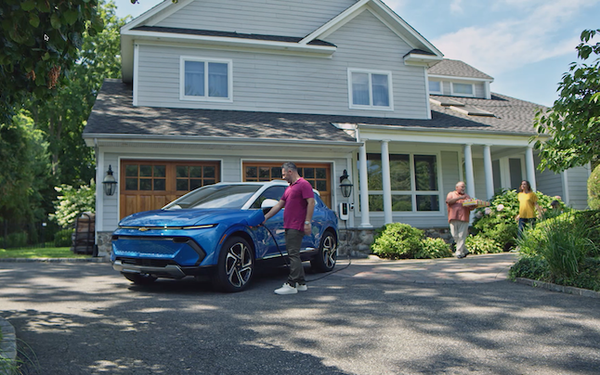 Chevrolet is launching a campaign that highlights the breadth of the General Motors division’s electric vehicles.

This is the first campaign that features multiple Chevrolet EVs together, and marks a step forward in Chevrolet’s intent to bring EVs to mainstream America, according to the brand.

The perception of EVs by many consumers is that they are too expensive, too small or too limited in range and capabilities for most people. This effort emphasizes that EVs can have mass appeal.

While some of the vehicles featured are currently available, like the Bolt, several won't be available until next year, including the Blazer EV, Equinox EV and Silverado EV pickup.

All of the Chevy EVs are on display this week at the Detroit auto show, where much of General Motors’ total exhibit space is focused on new technology.

At the center of the display for GM’s Buick division is the sporty Wildcat EV concept car.

In the nearby Cadillac portion of the exhibit, show attendees can enter  the  Cadillac Electriq Theater — with electric spelled with a “q” as a nod to the Lyriq EV. A kaleidoscopic 4-minute video highlights the brand’s move to  EVs.

As for the Chevy campaign, the division worked with its agency, Commonwealth//McCann, which also brought in its culture partner, Vice Media Group. The spot features a variety of consumers with a range of demographics, meant to represent the brand’s wide appeal.

Besides the 60-second spot and 30-second cutdown, the effort also will feature posts from a cross-section of social media influencers and personalities such as actor Terrence J and professional skateboarder Leo Baker, according to a spokesperson.