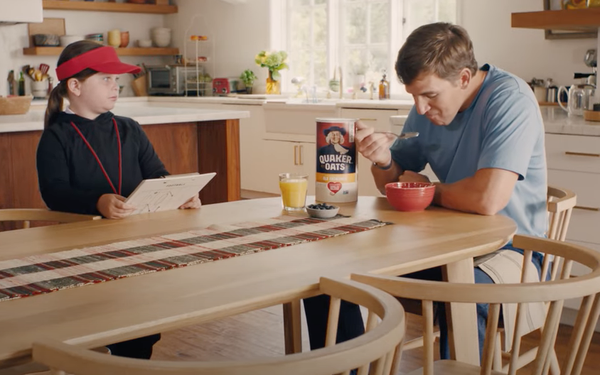 Eli Manning may wish he had never retired from pro football.

In his rookie season repping Quaker Oats oatmeal, the two-time Super Bowl champion falls under the tutelage of a “neighbor turned head coach” in the personage of a demanding seven-year-old girl.

In “The Superfood And The Superstar” platform, Manning is the latest NFL face to rep the oatmeal brand since last year’s “Fear of Missing Oats” spot that featured Drew Brees, Jerry Rice and Jerome Bettis.

This spot ” from the Mekanism agency -- titled “Oat Up!” --- opens at the breakfast table with the young girl pointing a finger at Manning and declaring,  “If you want to be a champ you gotta start like a champ!”

To which Manning responds “Yes, ma’am.”

Things get more demanding from there as Manning’s “coach” leads him through a series of backyard exercises.

“You call yourself a Manning?” the girl asks just before he takes a break and a voiceover inquires “Does she know that you’re retired?”

Manning says he’s “too scared to tell her.”

To celebrate the brand’s status as the official oatmeal sponsor of the NFL, it sought to present a combination of comedic characters and situations.

“We knew it had to be football-centric while keeping the charming, lighthearted family tone Quaker is known for,” a brand rep tells Marketing Daily.

“The result is a docu-style family sitcom meets an ESPN sports documentary. Eli’s genuine connection to our product and relatable sense of humor made him the perfect choice for this campaign.”