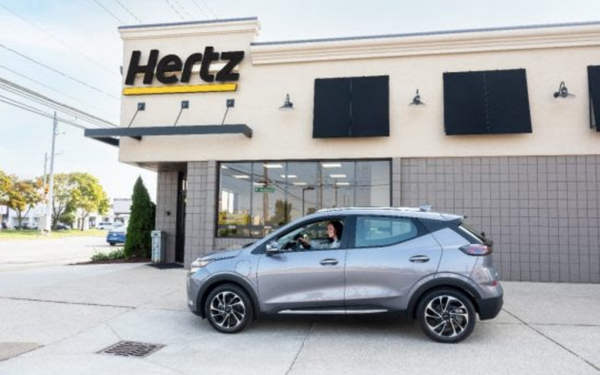 Many consumers might get their first exposure to driving an electric vehicle via a rental car.

Hertz plans to order up to 175,000 electric vehicles from General Motors over the next five years, the companies announced Tuesday.

The company will order Chevrolet, Buick, GMC, Cadillac and BrightDrop electric vehicles to expand its fleet. GM has announced that it will begin selling the Chevrolet Blazer EV,Equinox EV and and Silverado pickup EV all next year, joining the already available Bolt EV and Bolt EUV.

Hertz and GM believe this plan is the largest expansion of EVs among fleet customers -- also the broadest, because it spans a wide range of vehicle categories and price points, from compact and midsize SUVs to pickups to luxury vehicles.

The EVs will be for rent at 500 Hertz locations across 38 states. The company’s current goal is for one-quarter of its fleet to be electric by the end of 2024.

Over this period, Hertz estimates that its customers could travel more than 8 billion miles in these EVs, saving approximately 3.5 million metric tons of carbon dioxide equivalent emissions compared to similar gasoline-powered vehicles traveling such a distance.

Deliveries of the first GM EVs to Hertz, the Chevy Bolt EV and EUV are expected to begin in early 2023.

The partnership is a “huge step forward" for emissions reduction and EV adoption, GM Chair and CEO Mary Barra said in a release. Each rental experience will increase purchase consideration for EVs, she adds.