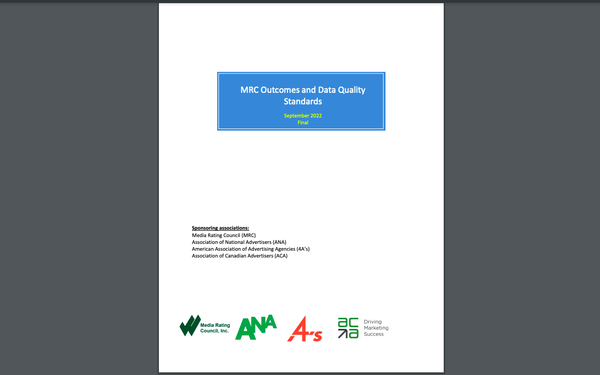 After years of development, debate, drafts and public vetting the ad industry finally has a set of uniform standards for measuring the outcomes of advertising and media buys, as well as the data utilized to do that. The Media Rating Council (MRC) this morning published the official final version of the industry's new "Outcomes and Data Quality Standards," creating a common reference point, definitions, processes and best practices for so-called "attribution" and ROI (return on investment) measurement and other higher order measures of campaign outcomes.

“This initiative began more than a decade ago with projects designed to standardize measures of ad delivery, and has now progressed to the measurement of business outcomes that are associated with ad exposure," MRC Executive Director and CEO George Ivie said in a statement included with this morning's announcement, which also included statements from representatives of the Association of National Advertisers and the American Association of Advertising Agencies endorsing it as new industry standards.

The ratification follows much industry vetting, including a 60-day public comments window that influenced, but did not materially change the final standards released this morning.

You can download a summary of the key elements covered by the standards here, which covers the frequently murky and somewhat-less-than-standardized approaches developed by a wide variety of suppliers of attribution, "multi-touch attribution," and marketing mix models, as well as experimental methods.

The decade-long effort to standardized outcomes has been part of an ongoing process of identifying and developing standards for a rapidly-changing media ecosystem, in which new sources of data and analysis are constantly evolving as a result of technological innovation enabling advertisers, agencies and media suppliers to look at things they could have looked at previously. Or look at them in new ways.

With the outcomes standards under its belt, the MRC is now in the process of creating a framework for standardizing next-generation processes such as AI and machine learning that increasingly are being used to process and analyze data that goes into and comes out of a wide variety of industry measures.

"We have built some standards information into things like outcomes and audience measurement and cross-media that deal with AI and modeling, so we’ve already created guidance within each major component," the MRC's Ivie said in an interview with MediaPost following an extension of his long-term contract with the council in June, adding, "But we haven’t seen the need to come out with, let’s say an 'AI standard,' or a 'machine learning standard,' because training those models, updating them, having a champion/challenger model and all of those approaches, they’re already pretty standard, because it’s not just for the media business. This goes on in all kinds of businesses. So right now, we don’t have a plan to do that."