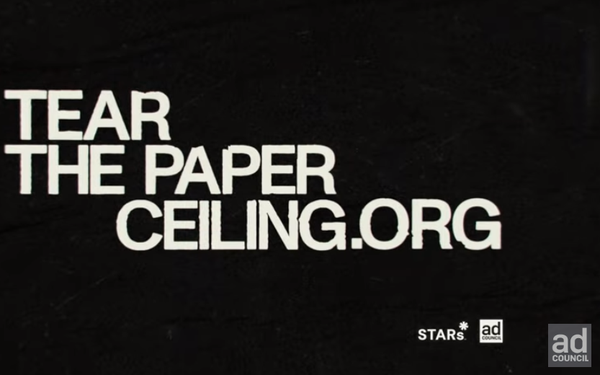 The Ad Council, Opportunity@Work and dozens of other national organizations have launched a public service effort highlighting the workplace bias against those lacking a four-year college degree.

The campaign, from Ogilvy, is called Tear The Paper Ceiling and the groups claim that 50% of the U.S. workforce is denied better paying jobs because they lack paper credentials like a bachelor’s degree.

The campaign calls on businesses and decision makers to remove those artificial barriers, arguing that many talented people are “Skilled Through Alternative Routes,” like community college, the military, certificate programs and workforce training.

The campaign highlights the stories of “STARs” like LaShana Lewis, who had an aptitude for computers but no college degree. She forged her own career path — from driving buses, to becoming a systems engineer, to founding her own consulting business, where she now serves as CEO.

According to research from Opportunity@work 32 million “STARs” have the skills for significantly higher-wage work versus their current roles. And there are 4 million other STARs, like Lewis, already in high-wage roles more reflective of their skills.

The campaign was unveiled this week at an event co-hosted with LinkedIn.

Ads will appear nationally across most analog and digital formats including channels owned by Comcast NBCUniversal, Google, YouTube, LinkedIn, Meta, Reddit and TikTok, and others. There’s also a website with resources for businesses to expand their “STARs” hiring.