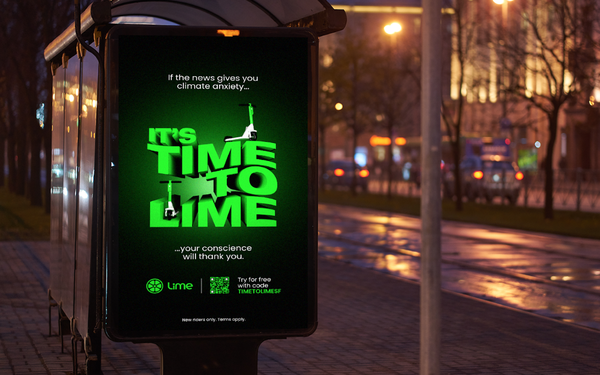 Lime is positioning itself as a solution to an unpredictable world in a global brand campaign breaking this week.

In “It’s Time To Lime,” the company's e-bikes and e-scooters are shown helping to liberate urbanites from they obstacles they confront -- from the search for parking, to the existential threat of climate change.

“It's been a challenging few years and we know people are hungry for a little more predictability, balance and optimism,” said Carolyn Rosebrough, Lime global head of brand and communications in a release. "This global campaign offers a reminder that we're here; whether you want to save time, money, our planet, or even your sanity, ‘It's Time to Lime.’"

Playing on superhero movie posters, creative design and copy position Lime as the hero to save riders from time wasted in traffic, metro delays and anxiety over their carbon footprint.

The effort follows the company’s "Break Up With Cars" campaign in April this year, which tackled driving in cities, highlighting how the over-reliance on cars has yielded pollution, congestion, wasted time and over 1.3 million deaths annually worldwide.