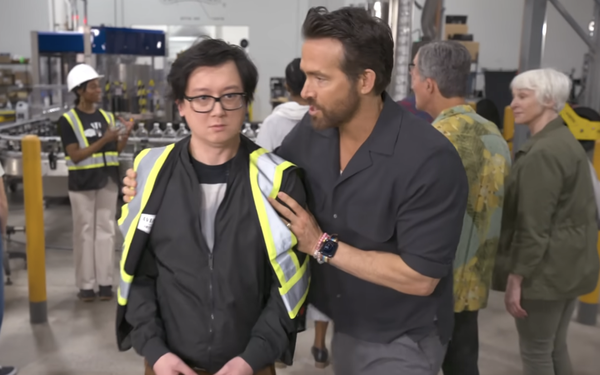 In a new ad, visitors to the Aviation American Gin distillery in Oregon get more than they bargained for when Aviation co-owner Ryan Reynolds hands them safety apparel and puts them to work.

Having opened last week, the facility doubles as a visitor center with amenities that include educational tours, a tasting room, cocktail bar and gift shop.

In this staged sequence of events, people filing into the Portland distillery are shown a portrait of Reynolds—the winner of three People’s Choice Awards—before he appears and says they’re going to get “the full gin-making experience.”

He proceeds to assign people to sweeping the floor, packaging Aviation bottles and lugging bags of ingredients.

At the end, the man assigned to packaging asks, “Can the tour be over now?”

To which Reynolds responds, “I don’t know. Is the gin done?”

The bewildered man concedes, “I don’t even know what that means.”

The birthplace of Aviation, Portland is “such a vibrant city with a rich, unrivaled spirits and cocktail scene,” Christina Choi, senior vice president at Diageo, which acquired Aviation in 2020, said in a news release.

Reynolds’ thoughts: “If a grown-up theme park and a bartender fell in love and produced offspring, it would be this gin factory.”

The tours are held in groups of no more than 12 and cost $28 per person, which includes a guided tasting.

A year ago, Reynolds celebrated Father’s Day by explaining how to make “the mother of all cocktails.”

He called it “the vasectomy.”