Citing Economy, Magna Downgrades U.S. Ad Growth Outlook For This Year And Next 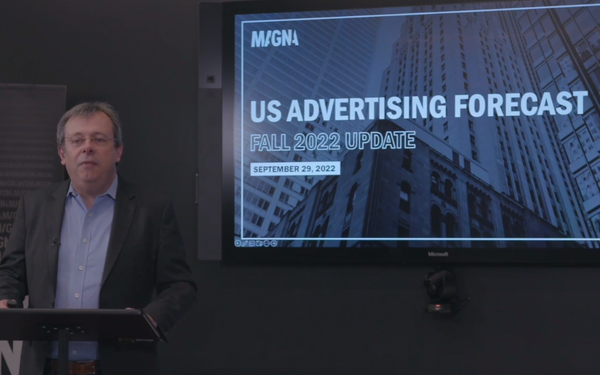 With growing economic uncertainties IPG’s media intelligence and forecasting arm Magna has cut its full-year 2022 U.S. ad growth forecast to 9.8%, down from its previous guidance of 11.1%.

This year’s growth is down sharply from 2021 when Magna reports full-year growth topped 25% as the general economy and the ad economy rebounded sharply from COVID-stricken 2020.

Magna bases its forecast on net media owner advertising revenues which will cross the $300 million mark this year for the first time reaching $323 billion.

But going forward, Vincent Letang, executive vice president, global market intelligence at Magna (and author of the forecast) says that gross domestic product growth will trudge along at a pace of between 1% and 1.5% for the next 16 months. That slow pace of economic growth combined with the lack of cyclical ad events has prompted Magna to downgrade its ad growth forecast for 2023 to 4.8%, down from the previous estimate of 5.8%.

Weaker categories dragging down ad spending include CPG, finance and retail. But heightened competition in the video streaming space will give a boost to entertainment spending, while travel will continue to recover, and online betting will surge as more states are expected to legalize the activity next year. Depending on supply-chain conditions, automotive spending might also see a resurgence, for the first time in two years.

Retail media networks will also continue to grow next year, to an estimated $42 billion from $31 billion this year, per Magna’s estimate.

The 2022 ad landscape is “a tale of two halves,” Letang said in a presentation video outlining the new forecast. Net advertising sales in the first half grew 11% to reach $151 billion with 14% growth in Q1 and 7% growth in Q2. Non-cyclical spending growth in the second half will slow to 6.6%. The good news: upwards of $7.3 billion in political spending will prop up the year, with 70% of it coming in the second half. The total political figure is a record for a mid-term year and 63% more than the 2018 mid-term cycle.

Local TV will be the prime beneficiary of that spending, attracting two-thirds of the total, Magna estimates, noting that political ads will account for 25% of total local TV ad revenue this year.

Streaming ads will increase 22% this year, adding another 33% next year.

Cinema will continue to rebound this year, adding 138% with sharply slowing growth next year (35%).

Total video will be up 8.3% this year but will be down 3% next year without the cyclical boost from political and sports.

Total audio will grow nearly 7% this year, adding another percentage point in 2023.