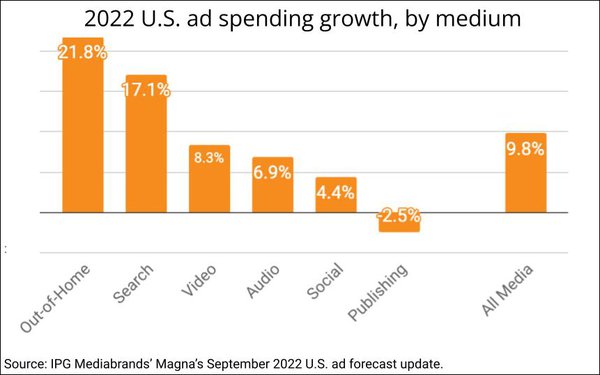 At a time when the ad industry’s leading economists and forecasters are rethinking the concept of the media “line items” they used to calculate ad spending and growth, it’s interesting that none of them have one for “mobile.”

That’s because mobile is not really a distinct ad-supported medium, but instead a means by which consumers access media, either via mobile apps or browsers. But if I read between the lines in recent ad forecasts, including this morning’s U.S. update from IPG Mediabrands, I can guess that, heading into the U.S. and global economic slowdown, mobile isn’t exactly the fastest-growing advertising medium.

While overall ad spending in the U.S. is projected to expand nearly 11% this year due to incremental stimulus like the Winter Olympics, World Cup and midterm elections, as much as $10 billion of that spend is coming from those events and is largely attributed to non-mobile media formats, especially TV.

“Social media is the media type that is struggling this year, due to the maturity of reach and usage,” Letang says, noting that the “targeting reach of social apps” has been hurt by Apple’s privacy framework updates on the phones of millions of iPhone users.

“Overall, we anticipate social ad revenues to grow by 4% to $63 billion this year -- with rapid growth of TikTok and almost no growth from incumbent social networks,” he explains.

Of course, consumers do use their mobile devices to access other high-growth advertising formats, including search (which will rise 17% this year), retail media apps (Letang did not provide a number for that, but said it’s among the fastest-growing segments within search), and streaming media apps, including free, ad-supported ones that are the fastest-growing segment within the TV/video marketplace.