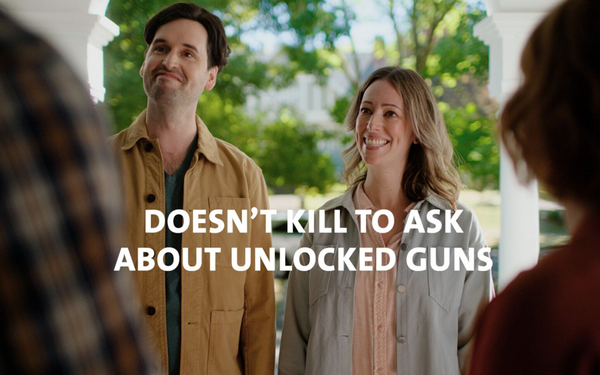 At Northwell’s own pediatric hospital, the Cohen Children’s Medical Center, the number of gunshot victims seen this year is already at 23, compared with the just six-to-eight total in any of the preceding four years.

So, after the Centers for Disease Control reported in May that guns are now the leading cause of kids’ deaths in the U.S., with 13 of them succumbing daily, Northwell decided that its five-year-old push for gun safety -- which has included such steps as establishing a Gun Violence Prevention Center -- needed to go even further.

The result: an extensive linear TV, print, radio, out-of-home and digital campaign from Strawberry Frog that’s “meant to provoke” -- but that nonetheless received “overwhelming support” in pre-testing -- not only from victims of gun violence but from gun owners and police.

That’s because, rather than being against guns, the campaign is a plea for gun safety.

In a country “with 400 million guns and only 320 million people, and guns codified in the constitution, they’re not going anywhere” Soto explained.

“We’re all shocked when a mass shooting takes place,” he added, “but we have the equivalent of a mass shooting, killing 13 kids, everyday. So how do we create a safer environment?”

Northwell starts with a 30-second spot that finds a couple dropping their son off for a playdate at a neighbor’s house. As a tiger’s growl is heard in the background, the mom says, “We were just wondering if he’ll be locked up.”

“Absolutely,” answers the other mother. “We never let him out with kids around, not even our own.”

An on-screen message then reads, “An unlocked gun can be just as dangerous” and both the text and a voiceover add, “It doesn’t kill to ask about unlocked guns in the house. Guns are now the leading cause of death for kids.”

The campaign, running through year’s end, kicked off this past Wednesday, Sept. 28, with placements from Horizon Media – including a high-visibility appearance during the New York Yankees game in which Aaron Judge tied Roger Maris’ 61-year-old American League record of 61 homeruns set in 1961.

But Northwell’s crusade isn’t limited to the New York market.

National full-page ads ran in The New York Times on Wednesday and Sunday. They listed well over 100 other health systems backing the effort, with copy concluding, “Before you drop your child at someone else’s home, ask if there’s an unlocked gun—because it doesn’t kill to ask.”

This week, the multimedia campaign is set to expand to other regions, thanks to an impetus that started within the American Marketing Association’s healthcare division. Materials have gone out to some 165 health systems representing over 1,000 hospitals, Soto explained. Each system can choose to run generic versions of the ads as PSAs, or to brand them in paid advertising like Northwell.

The campaign seeks nothing less than a massive change in Americans’ behavior, Soto said, equating the desired effect with how seat belts became the norm in automobiles. In the ‘80s, he “thought nothing of jumping in a car, turning the engine on and taking off and going somewhere. Now you can’t fathom getting in a car without putting your seat belt on.”

Parents do want to protect their children Soto noted. “We have no problem dropping off Johnny or Susie to our neighbor’s house and saying, ‘Johnny has food allergies and Susie doesn't really know how to swim. Do you have a pool?’ But we rarely ever ask, ‘Is there an unlocked gun in the house?’ We think that should be a common component of the language we use to communicate to one another.”

The campaign, aptly titled “It doesn’t kill to ask,” largely targets parents and grandparents, but more specifically what Soto called the “chief medical officer of the home: women between 25 and 55.”

All ads suggest that people check out HospitalsUnited.com, which offers “tools to spur the conversation.”

Previous campaigns showing the devastation of gun violence haven’t succeeded in “bending the curve,” Soto noted, so “we’re trying to use a provocative story-telling vehicle to get consumers to engage in a very different way.”

“This isn’t about gun violence, this is about gun safety,” he declared, deferring to a gun-owning woman from Alabama who told a focus group, “If you own a gun and you object to this campaign, you shouldn’t own a gun, because this is about the safety.”