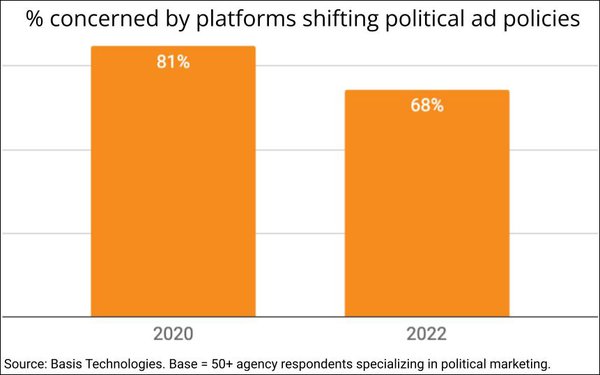 The volatile nature of big digital platforms' policies remains the biggest concern among political media and marketing agencies, but it has moderated considerably from just two years ago, according to findings of a periodic survey conducted by Basis Technologies.

While more than two-thirds (68%) of this year's respondents cited the platforms' "shifting policies and restrictions on political ads" as their top concern, that's down from the 81% who cited it when Basis surveyed them in 2020.

The decrease is significant, because Basis' tracking indicates more of the 50-plus agency executives surveyed are leaning into programmatic media options, indicating that they are more, not less reliant on big digital platforms for making their campaign goals.

"As political marketers increase programmatic usage, they are likely to encounter the complexity of the platforms and options," Basis Group Vice President Jaime Vasil writes in an analysis of this year's findings.

Despite becoming more reliant on programmatic ad buys, only a minority of the respondents (44%) said they are concerned about the deprecation of cookies and "potential targeting limitations," which Vasil attributed to corresponding improvements the quality and accessibility of U.S. voter registration data.

"Popularity of using Voter file data also made a big jump," Vasil notes, adding: "This is consistently among the top five selections in the three election cycles Basis Technologies has conducted this poll."

"This typical tactic for finding voters still has opportunities to innovate because of continued fragmentation of audiences in digital channels," Vasil continues. "This can also mean that political advertisers aren’t concerned about cookie depreciation, especially when Google is delaying the blocking of third-party cookies on Chrome to 2024. However, the industry may be in for a wake-up call as they are forced to re-think voter targeting right before a big 2024 election year."

Improvements in CTV technology and scale is the No. 1 most promising development (cited by 80% of respondents), followed by programmatic access to premium inventory (62%), improved confidence in digital media (54%), and improved voter registration data (54%). 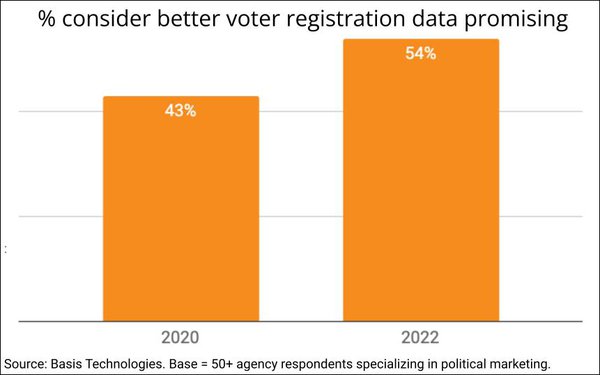