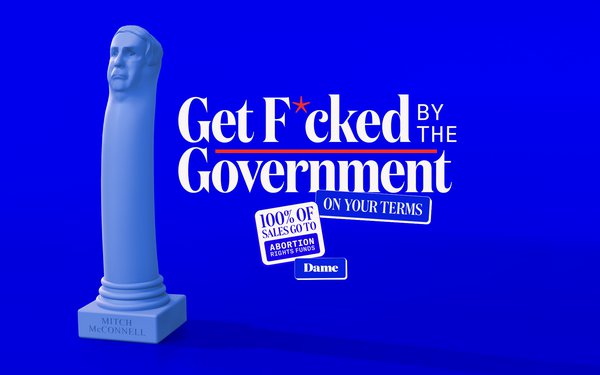 It’s part of the company’s “Get F*cked By The Government On Your Own Terms” campaign, the premise being that the Roe v. Wade reversal pretty much f*cked all rational-thinking Americans.

All proceeds from the sale of the toys will go toward organizations fighting for the right to access abortion healthcare following the high court’s decision in June to overturn the 50-year precedent providing the right to women across the country to have an abortion.

The price: $80, a nod to the 80% of Americans who believe abortion should be legal, according to a recent Gallup Poll.

McConnell’s role in this turn of events was diabolical and the outcome horrific for all women—they deserve the right to decide when and if to terminate a pregnancy.

But isn’t this approach a little…..icky?

Odd fetishes aside, what woman in her right mind would want to take a solo pleasure flight with the face of Prune Face Mitch for stimulation? Even thinking about it…What a mood-killer. Just saying.

Alexandra Fine, Founder and CEO of Dame Products, stated: “In dismantling the critical right to abortion access, the government has f*cked America. At Dame, we believe our bodies are our own, and it is our choice to do with them as we please. This encompasses everything from pleasure to life-saving healthcare. So we wanted to engage in the discourse, raise funds, and have fun doing it. Pleasure is our guiding force and we need autonomy over our bodies in order to enjoy them.”

Mischief @NFA and client created a website to help promote the toy which can be accessed here. The site also allows you to register to vote and, of course, get to know a little bit more about Dame.