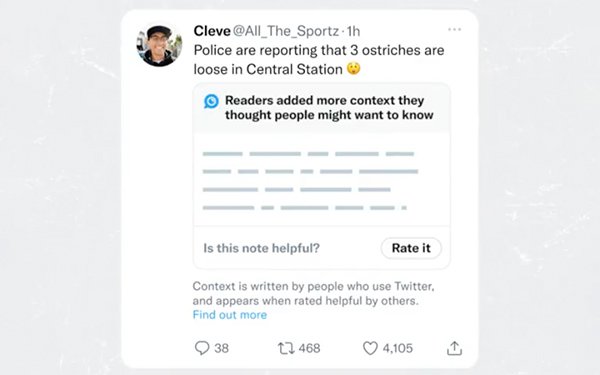 Twitter announced on Thursday that its community-based fact-checking feature, Birdwatch -- which relies on users to provide context to misleading tweets -- is now available to all U.S. users.

Birdwatch was originally announced weeks after the January 6 attack on the Capitol in 2021, as an attempt to curb the spread of misinformation on the social platform.

To do so, the feature invites Twitter users to identify information in tweets they believe is misleading by writing notes that provide helpful context as the tweet spreads.

In a tweet from October, Birdwatch explains that for contextual notes to reach the status of “Helpful,” it uses “bridging-based ranking.” This ranking system isn’t driven by majority rules, or popularity; instead Birdwatch shows notes that are found helpful by people who typically disagree (based on prior Birdwatch activity).

“This increases the odds that context added to tweets is helpful to wide audiences,” the company tweeted.

Even though Birdwatch notes will now be visible to all U.S. Twitter users, not everyone will be able to add context or rank contributions. Users can sign up to be contributors. From there, they can rate notes. To unlock the ability to write notes, they must earn a rating impact of at least 5 points.

Any contributor’s ability to write new notes may be locked if they write too many notes found unhelpful by other users. To regain the ability to write notes, they must increase their rating impact by 5 additional points.

Twitter has been developing and testing Birdwatch for over a year. According to the results of four internal surveys run between August 2021 and August 2022, a person who sees a Birdwatch note is 20 to 40% less likely to agree with a potentially misleading tweet than someone who sees the tweet sans context warning.

Twitter said it found Birdwatch to be helpful to a wide range of people -- and said the feature is informative independent of political affiliation and has informed people's sharing behavior, as people who see a context note are on average 15 to 35% less likely to like or retweet posts.

While Birdwatch is largely a decentralized, user-based approach to content moderation, Twitter also relies on internal misinformation moderation practices. In August, the company announced a number of election integrity features to prepare for the upcoming midterms, including labeling misleading content.

"We've made the Birdwatch algorithm publicly available on GitHub, along with all the data that powers it, so anyone can audit, analyze, or suggest improvements," the company stated. “Whether you're a researcher, a hobbyist, or simply curious, you can explore and run the Birdwatch algorithm on your own computer using the guide link shared above.”
crowd sourcing, digital, digital content, misinformation, social media, twitter
Next story loading