Virtual Reality And Reality Are The Same Thing In 'The Peripheral' 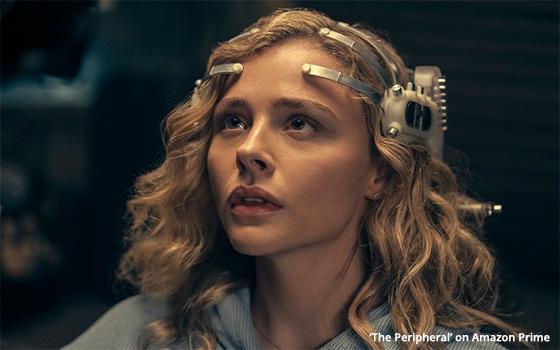 The TV Blog gravitates often to new TV shows with a futuristic slant because they show us different scenarios of how our world and our present-day technology could evolve in the years to come.

The latest one of these, “The Peripheral,” comes to Amazon Prime on Friday. In this show, the focus is on virtual reality and how it could evolve to the point where the “reality” that is “seen” in the virtual world merges with the real world until the two are indistinguishable.

This may or may not be the very definition of “metaverse,” or it might represent an advancement past the metaverse entirely. As I understand the metaverse now, its virtual worlds are at least known to be virtual by their users.

In “The Peripheral,” users of an advanced version of VR begin to have no idea what is real or what isn’t.

The show tells its story from the vantage point of two timeframes -- the near future of 10 years from now in 2032, and a farther future in 2099.

The technology seen in 2032 is much farther along in the 2099 future. In the 2099 world, scenes from what used to be known as people’s imaginations are so real that they become part of the urban landscape.

Do not be confused, citizens of 2022. The makers of “The Peripheral” tell their story in such a way that the details of what they are trying to convey are revealed gradually, and just enough that we primitives in the present day can understand as much as we need to.

Moreover, like the best of these kinds of near-future sci-fi dramas, the world of 2032 depicted in “The Peripheral” is totally familiar to us, except that the technology in the world of a decade in the future has undergone 10 years’ worth of change and evolution.

In the photo above, Chloe Grace Moretz wears an advanced virtual reality “helmet” that takes her on journeys that she feels both emotionally and physically. She plays a young woman of the Blue Ridge region who gets caught up in the dark web.

The device she wears on her head is less like a helmet than a pair of VR claws intent on stealing her brain and her soul.

This does not happen in the first episode of “The Peripheral” previewed by the TV Blog. In fact, Episode One ends with a cliffhanger that almost guarantees moving on to Episode Two.

“The Peripheral” starts streaming on Friday (October 21) on Amazon Prime.