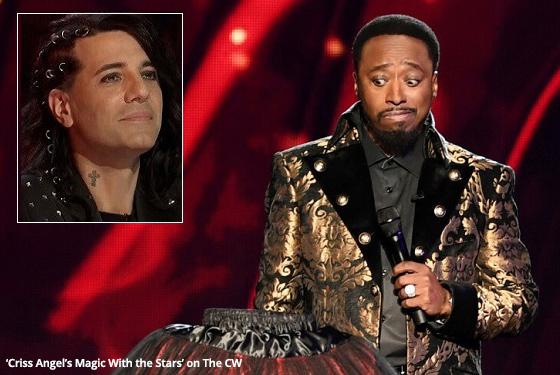 The CW must believe in magic because it now has three prime-time magic shows.

The newest is “Criss Angel’s Magic With The Stars” premiering Saturday. With Criss Angel (inset above), the network has gone into business with a magician and illusionist who might be the most successful and best-known magic performer on the planet Earth.

The CW is already in business with Penn & Teller, who, like Criss Angel, are long-time Las Vegas headliners. Their CW show, “Penn & Teller: Fool Us,” has been on The CW since 2015.

The third show is “Masters of Illusion” hosted by Dean Cain. The show features a number of professional magicians, escape artists and illusionists.

Of the three, the new Criss Angel show is the grandest. The premiere episode alone features an illusion that is considered to be one of the most legendary in the history of magic -- an elaborate levitation trick.

The two stars who will each try and perform it in the premiere are Corbin Bleu, a TV actor who also sings and dances, and teen actor Miles Brown, 17, who was one of the stars of “Black-ish.”

In each one-hour episode of “Criss Angel’s Magic With The Stars,” two guests from the entertainment world will perform three tricks apiece in a good-natured magic-performance competition.

As they compete for the show’s grand prize, a golden magic wand, they will be judged by Criss Angel, fellow magic professional Lance Burton and comedian Loni Love. Comedian Eddie Griffin (above photo) is the show’s host and emcee.

The show is hugely entertaining and very easy to enjoy. One reason is that the tricks are great. In addition, the show includes very rare peeks inside Criss Angel’s gargantuan personal workshop and studio where he and a team of technicians and magic coaches design, build and test his elaborate illusions.

It is here in this warehouse-sized facility that the contestants will rehearse their illusions under the direction of two of Criss Angel’s coaches.

“Showmanship’s the secret to magic,” instructs one of them. “You have to suspend their disbelief no matter what you do.”

Criss Angel has not been on TV with a regular series since his last show, “Criss Angel Mindfreak” ended its run on A&E in 2010.

The very beginning of “Criss Angel’s Magic With The Stars” carries a warning. “The stunts and illusions shown on this program are performed without the use of any camera or video trickery,” say the words that appear on screen.

“Attempting these can be extremely dangerous and can result in serious injury or even DEATH!” the message warns.

You got that? Even DEATH! The message is clear: Don’t try this at home.

“Criss Angel’s Magic With The Stars” premieres Saturday night (October 22) at 8  Eastern on The CW.