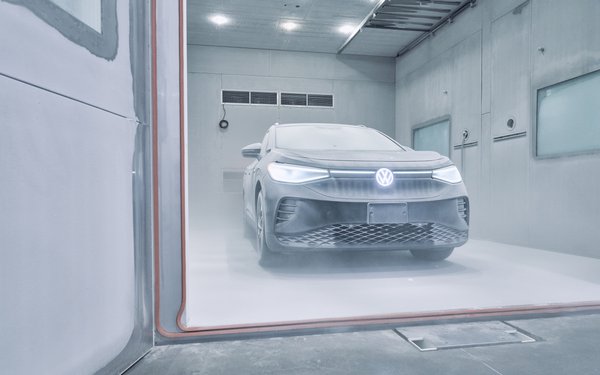 I have been asked many times if it’s safe to charge an electric vehicle in the rain.

It's not an outrageous question. We’ve been taught (most of us, anyway) not to drop a plugged-in appliance in the bathtub, toilet or other body of water.

Automakers are aware that public charging will sometimes take place in inclement weather. Vehicle-charging receptacles and the charging plugs are manufactured to withstand rain and dirt. That said, it wouldn't be wise to pour a glass of water directly into your vehicle’s charge port. (Do I really have to say that?)

It is in an automakers’ best interest that vehicle batteries be durable so that they don't have to replace them during the warranty period, which varies depending on the manufacturer, but many are offering eight or 10 years of coverage on batteries.

Volkswagen of America — which currently offers an eight-year warranty on its batteries — has opened an impressive facility in Chattanooga, Tennessee that is subjecting batteries to extensive testing.

The team of 30 engineers replicate extreme climate conditions and mechanical tests to optimize EV batteries for safety, durability and quality.

They focus on various climatic, mechanical, electrical, and corrosion tests of battery cells and battery packs. They can replicate every climatic environment in the world and scale between extreme settings well beyond what a typical customer would put a vehicle through.

This is especially important in countries like the U.S. -- and even more so for the North American continent with its climate variations, from arctic cold to desert heat.

The $22 million Battery Engineering Lab is the flagship facility for Volkswagen’s battery expertise in North America. It is money well spent.

By developing critical battery expertise in-house, the 32,000-square-foot facility will enable Volkswagen to gain a competitive edge in the push toward electric mobility.

Going forward, Volkswagen aims to look at emerging battery technologies and get an early understanding of how new concepts and prototypes can withstand the company’s rigid specifications. These insights are crucial know-how, as battery technologies continue to improve in terms of energy density, weight and cost, and shape the characteristics of an electric vehicle.

Building the Battery Engineering Lab from the ground up allowed Volkswagen to install highly specialized equipment. One of them is the electrical Multi-Axial Shaker Table. This unique machine allows for extreme vibration tests to simulate one average year of driving (about 9,321 miles) in just one week. That’s the equivalent of driving from Orlando to Seattle three times in seven days.

Other tests include a drive-in climate chamber with the ability to set temperature ranges between --94° to 266° F to mirror hundreds of possible climate conditions.

The BEL is also equipped with thermal-shock chambers that rapidly expose battery packs to changing hot and cold environments to stress their welds and fasteners, durability tests with certified, super-fine “Arizona” dust to add abrasive elements and test the sealing of battery packs, and water immersion tanks to simulate water ingress scenarios.

Maybe consumers aren’t aware of this rigorous testing, but some are hesitant to buy EVs because they are leery of how much it might cost to replace the battery. Just this weekend, I heard a popular Detroit radio DJ telling his audience he’s not going to buy an EV because a battery replacement would cost $10,000.

While it's true that replacement prices can range from $2,500 up to $20,000 according to Recurrent.com, if a battery is within its manufacturer warranty, typically eight years and 100,000 miles, then you should get a replacement battery at no extra cost. But what if it is out of warranty?

Facilities like VW’s aim to make sure that batteries will have the same reliability as a gas-powered engine. That will not only appeal to consumers, but will also cut an automaker’s warranty claim costs.