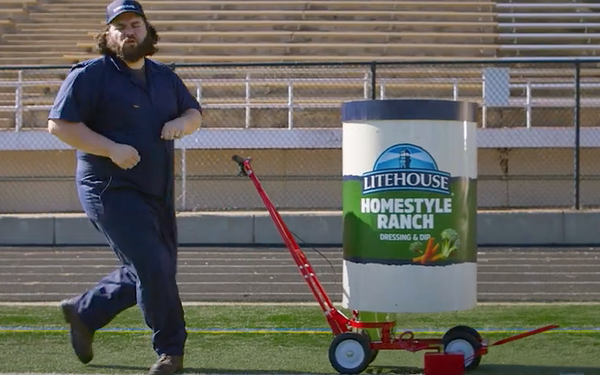 Litehouse Inc. is using freeze-frame, stop-motion and 3D camera effects for the first time to call attention to its dressings and dips during the college and professional football seasons.

“Litehouse In The House” is a multichannel campaign ranging from in-store marketing to ads on streaming television and podcasts.

The initiative marks an expansion from previous Super Bowl-related retail promotions to a season-long series of retail and consumer tactics running through February.

It’s designed to show how the company’s products are a “perfect addition to any tailgating or home-gating party,” Litehouse brand manager Heidi Wieber said in a news release.

The company says the duration of the campaign provides an opportunity for retailers to boost sales and increase basket size” given that retailers that promote Litehouse typically see at least a 10% increase in sales prior to the Super Bowl.

Football is referenced in this spot from the Karsh Hagan agency as a worker pretends to paint lines on a field with Litehouse’s Homestyle Ranch flavor while mentioning Picasso, Vincent van Gogh and Michelangelo.

“This is my canvas,” he explains.

Home-gating and special effects intersect in this commercial showing three people in a kitchen being mesmerized by floating clementines and potato chips—accompanied by music but no spoken words.

TV ads on such platforms as Food Network, Discovery, Hulu and Disney+ are being used because they over-index for viewing by moms.

Litehouse is also running ads on the true-crime podcast “The Deck.'