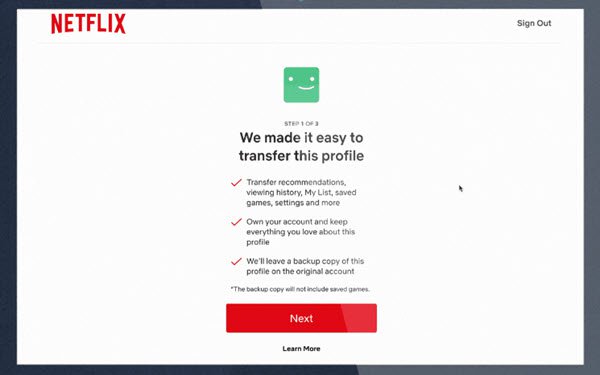 Netflix has launched a Profile Transfer feature to allow subscribers and currently free users to switch to a new account without losing their existing profiles — presumably to support an expanding rollout of its program requiring current password sharers to open their own paid accounts, and possibly to make a transition seamless for current paying account owners who decide to switch to the cheaper ad-supported tier coming in November.

All of which is helping Netflix boost its stock in the lead-up to its quarterly earnings report later today. Netflix shares have risen 16% since it unveiled its ad-supported tier/AVOD plan last Thursday, and rose higher in pre-market trading this morning, following the Profile Transfer announcement on Monday.

Netflix is rolling out the Profile Transfer feature worldwide. The transfers will be enabled automatically in all countries except South Korea and the U.S., where subscribers will need to activate it from their settings. Subscribers will receive an email when the profile transfer tool is available on their accounts.

“Today, we’re launching Profile Transfer, a feature that lets people using your account transfer a profile — keeping the personalized recommendations, viewing history, My List, saved games, and other settings — when they start their own membership,” the company said in its announcement, which made no direct reference to the coming demise of password sharing, or the coming AVOD. “People move. Families grow. Relationships end. But throughout these life changes, your Netflix experience should stay the same.”

The feature would also presumably help retain password sharers kicked off the gravy train by making it easy for them to start their own accounts — including a reduced-price Basic With Ads account, and possibly enable quick transitions for no-ads account holders who want to save money by switching to the AVOD option. Retention, even at a substantially lower price, has become even more critical in the current inflationary environment

Profiles can be easily transferred via instructions in the app, and the transfer function can be turned off via account settings at any time, Netflix said.

Netflix has been testing and implementing programs that force free users to set up paid accounts in several Latin American markets. The efforts have generated some confusion, as well as anger.

The latest variation, “add-a-home,” was launched in August in Argentina, the Dominican Republic, El Salvador, Guatemala and Honduras. It includes just one home where the service can be used on all devices for the core subscription price. Members of that household can also watch Netflix on tablets, laptops or mobile phones when outside the main home, although there are apparently limits on that. Use by additional homes must be purchased for an extra per-month fee that varies by market.

The introduction, in which users were logged off their Netflix accounts on their smart TVs and told they had to pay an extra fee to enable use by additional households, set off protests in Argentina, in particular.

But Netflix, which needs all of the revenue it can muster to support content and international expansion, has been firm in confirming its intention to eliminate password sharing worldwide.