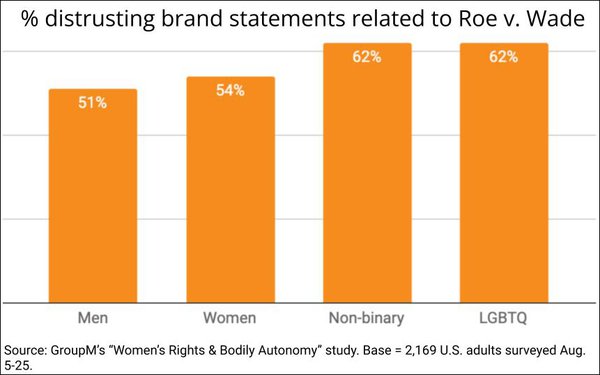 Following the decision earlier this year by the U.S. Supreme Court overturning Roe v Wade, GroupM and Mindshare research has found that a majority of those polled don’t trust brand statements on the issue and believe that the media misinformed the public about the issues surrounding the case. GroupM and Mindshare presented its findings at an Advertising Week session today.

The research found that 51% of women, 54% of men, and 62% of non-binary individuals, as well as 62% of LGBTQ people don’t trust brand statements because they feel they’re inauthentic and that brands are just trying to attract more consumers. For women, that number rises to 55% for multiracial/mixed race women. For men, that number rises to 60% for Hispanic men and 61% for white men.

More than a third of women (34%) said they would stop purchasing from a brand if their CEO made regressive statements about bodily autonomy. This number rises to 41% for multiracial/mixed-race women, as well as 38% for the LGBTQ+ community in the study.

And 25% of those surveyed said they were changing their purchasing decisions because of the overturning of Roe.

LGBTQ+ people (43%), Hispanic men (41%), and non-binary individuals as a whole (46%) were most likely to say they were changing their purchasing decisions because of the overturning of Roe.

41% of women, 36% of men, and 62% of non-binary individuals, as well as 55% of LGBTQ believe that brands should support employees through organizational policy when it comes to taking a stand on social issues around women’s rights and bodily autonomy. This number rises to 62% for non-binary folks and 51% for high income women.

Over 50% of Gen Z and 40% of millennials in this study and over 50% of LGBTQ people want brands to work with NGOs and abortion advocacy groups.

The majority of people in the study (67%) said that media played a significant role in spreading inaccurate information regarding the reversal of Roe vs Wade. Sixty-six percent of women, 69% of men, and 77% of non-binary as well as 76% of those identifying as LGBTQ agreed with this statement.

The majority of women (63%), men (64%), and non-binary individuals (83%), as well as those who identify as LGBTQ (78%) said that the media has a responsibility to educate people on bodily autonomy.

The majority of younger generations surveyed believe that creators on social media speak about bodily autonomy in a more progressive way than mainstream media.This belief is held by 57% of Gen Z in the study.

GroupM’s “Women’s Rights & Bodily Autonomy” survey was deployed through the GroupM/ Choreograph proprietary online survey Audience Origin, consisting of 2,169 respondents. The company said the primary objective was to gather the perspectives and views of communities who are often overlooked, but most impacted by the loss of bodily rights.

While not a nationally weighted study, the research was conducted with a sample reflecting the diversity of society with distribution among socioeconomic levels, age groups, genders, and varying identities across the U.S.

Field work was conducted between August 5th – 25th in English and Spanish language.