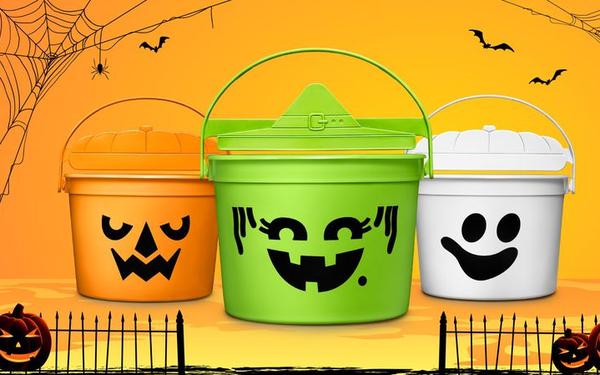 Halloween pails -- which kids can use as a toy after they've eaten out of them -- are coming back to McDonald’s Happy Meals starting today, for the first time in six years.

The return of the pails, a.k.a. Boo Buckets, follows the Oct. 3 release of adult Happy Meals. There are three designs, and customers pay $2-$3 extra for the privilege of having their meal delivered in a bucket.

The last time McDonald’s offered Happy Meals in a Halloween pail was in 2016, which was the 50th anniversary of the 1966 "It’s the Great Pumpkin, Charlie Brown." That 30-minute special won’t air on TV this year, except for Apple TV+ for a limited time.

The Halloween-themed buckets are expected to be offered until Oct. 31.

The promotion comes as consumer participation in Halloween is expected to reach a new record in spending -- $10.6 billion -- according to the National Retail Federation’s annual holiday survey.

According to the survey, consumers plan to spend $100 on average for Halloween candy, card, décor and costumes. Spending on kids’ and adults’ costumes is expected to total $2.9 billion, the highest since 2017.