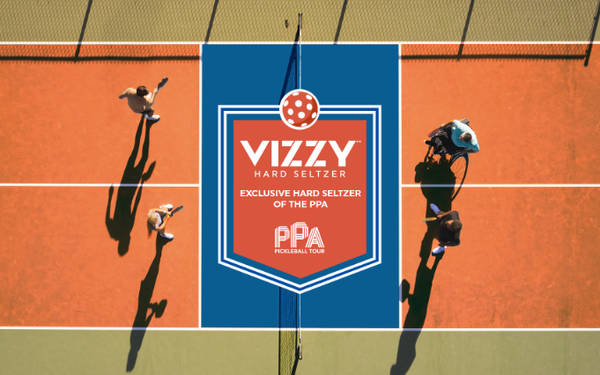 Molson Coors Beverage Co.’s Vizzy has become the official hard seltzer of the Professional Pickleball Association in a deal that will also expose the company’s beer brands to younger enthusiasts of the fast-growing sport.

Typically described as a cross between tennis, badminton and ping-pong, pickleball originally caught on with older generations and retirees in states like Florida.

It comes as consumption of hard seltzers by younger consumers has been on a decline—with many opting for ready-to-drink cocktails.

Moreover, Molson Coors beer brands Coors and Miller are not a sweet spot for those consumers.

Marc Ippolito, president of Burns Entertainment, which connects brands with celebrities, influencers, music opportunities and sponsorships, explored the world of pickleball this summer.

“It’s skewing way younger and has become so popular. It’s great exercise for anybody, and the barrier to entry is not expensive,” Ippolito tells Marketing Daily.

From a viewer standpoint, approximately 60% of the audience for pickleball competitions has household income in excess of $100,000, according to Ippolito.

“There were openings for national partnerships in the $500,000 range, which I think is a great value. If you’re looking to reach a younger demo in a different way, it’s a big opportunity,” Ippolito adds.