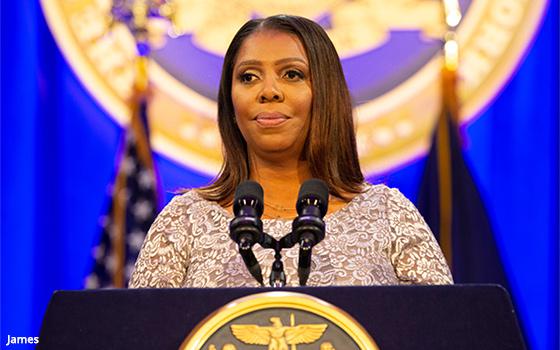 “We can no longer rely entirely on the industry to regulate itself through voluntary commitments,” James stated in the report, which written in response to the May 14 mass shooting at a grocery store in Buffalo.

Among other recommendations, James is calling for Section 230 of the Communications Decency Act to be revised in ways that would encourage platforms to restrict livestreaming, and to block posts showing "unlawful violent criminal" conduct.

In the report, James says the shooter, who killed 10 Black people, was radicalized by “anonymous, virtually unmoderated websites and platforms,” such as 4chan.

“The anonymity offered by 4chan and platforms like it, and their refusal to moderate content in any meaningful way ensures that these platforms are and remain breeding grounds for racist hate speech and radicalization,” the report states.

In July, a grand jury indicted Payton Gendron, a teenager, for federal hate crimes in connection with the shooting.

James' report advocates for revisions to Section 230 of the Communications Decency Act, which broadly immunizes web companies from liability for posts by users. That law, passed in 1996, already has some exceptions -- including for users' posts that violate federal criminal laws, infringe intellectual property rights, or violate state prostitution laws.

James is recommending that Section 230 should only protect companies that “take reasonable steps to prevent unlawful violent criminal content (and solicitation and incitement thereof) from appearing on the platform.”

James also argues that companies that Section 230 shouldn't apply when companies allow users to livestream events, unless the companies impose restrictions such as “verification requirements and tape delays” that are “tailored to identify first-person violence before it can be widely disseminated.”

The report says livestreaming is now “a tool for mass shooters” that requires regulation.

“The Buffalo shooter was galvanized by his belief that others would be watching him commit violence in real-time,” the report states. “Livestreaming has become a tool of mass shooters to instantaneously publicize their crimes, further terrorizing the public and the communities targeted by the shooter.”

Twitch, the platform used by the shooter, disabled the livestream within two minutes after the violence began, according to the report.

Chamber of Progress CEO Adam Kovacevich adds that the proposed restrictions on livestreaming aren't practical on the internet.

“Tape delays have worked great for live televsion broadcasts, when there's one broadcast for the whole country, and one person who has to monitor that broadcast,” he tells MediaPost. “But that doesn't work at all for the internet.”