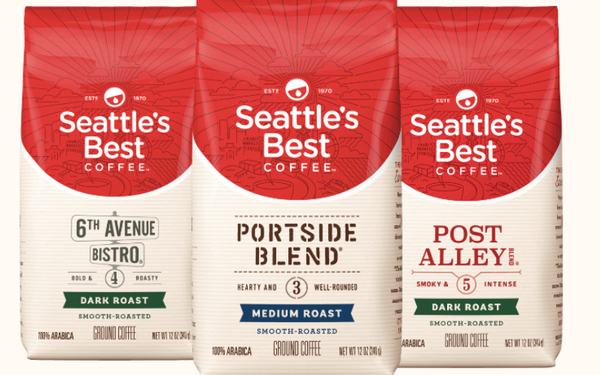 Nestlé SA will acquire Seattle’s Best Coffee from Starbucks Corp. and add the brand to its North America portfolio alongside Blue Bottle, Nescafe and Nespresso.

It’s the latest interaction between Starbucks and Nestlé since the two companies formed the Global Coffee Alliance in 2018—under which Nestlé paid $7.1 billion for the rights to sell Starbucks coffee products to retail outlets.

Since then, Starbucks has grown its dollar share of ready-to-drink coffee in retail outlets tracked by NielsenIQ to 66.8%, followed by Danone—with its International Delight and Stok brands—at 11.5%, in the four-week period ended Oct. 8.

Acquired by Starbucks in 2003, Seattle’s Best sells whole bean, roast and ground packaged coffee as well as K-Cup pods that are available in a variety of roasts and flavor profiles.

Schultz alluded to “a closer” partnership with Nestlé that would include the introduction of Starbucks varieties on Nespresso's digital sales platform, “a channel that does not presently exist for us and represents a massive global opportunity.”

“With the well-known Seattle’s Best Coffee brand, we will continue to build our leadership in coffee by offering consumers more choice for their everyday coffee,” Nestlé Coffee Brands head David Rennie said in a news release today.

The transaction—financial terms of which were not disclosed—is expected to close by the end of this year.