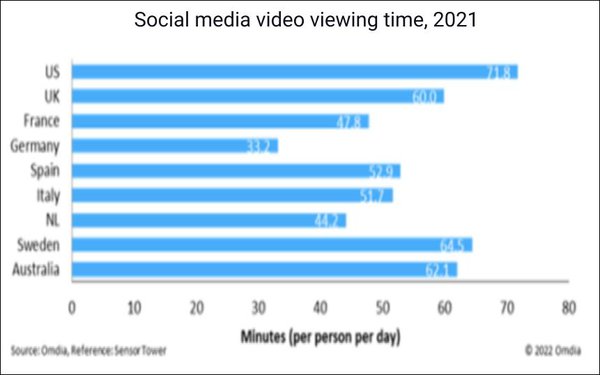 TikTok has surpassed Netflix to become the second most-viewed app in the U.S. among those under 35, according to a consumer survey by Omdia.

Among the younger demo in the U.S., YouTube, TikTok and Netflix are followed by Facebook Watch, Twitch, Amazon Prime Video, the Roku Channel, Peacock (free ad-supported version), Hulu and Tubi.

TikTok does not enjoy the same level of popularity in the UK and France, where it is the fifth most-watched among video services overall—below iPlayer, Netflix and Amazon in the UK, and TF1 services, Netflix and 6Play in France. YouTube remains the most watched platform in these markets. Among over 35s, TikTok does not even make the top 10.

“For broadcasters, commercial or otherwise, keen to engage younger viewers, the increasing importance of TikTok to reach and grow new audiences should not be understated,” sums up Omdia Senior Director Maria Rua Aguete.

On average, social video viewing time rose by nine minutes in 2021, to 60 minutes per person per day. In the U.S., the average was even higher: 71.8 minutes per day (chart above).

While Facebook was number one in 2021, averaging 18.7 minutes per person per day across the nine countries, that was down somewhat from 2020, due to stalled monthly active user growth during most of the year.

Meanwhile, TikTok saw the fastest viewing growth: up by 6.4 minutes, to an average 18.1 minutes.

That indicates that TikTok is “almost certain” to overtake Facebook in viewing this year, according to Omdia.

That’s despite Facebook’s global launch of the TikTok-like short video feature Reels in February, its partnering with high-profile TikTok creators to rebrand itself, and its addition of virtual reality games like “GTA: San Andreas.”