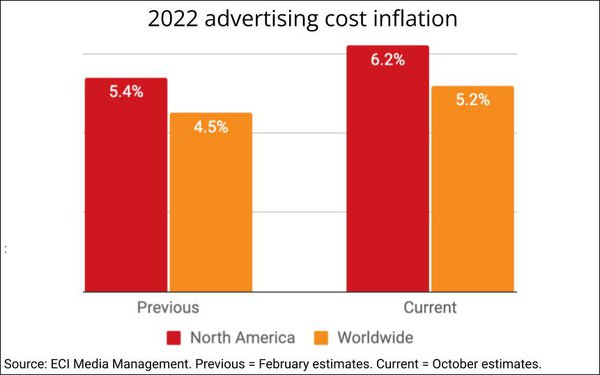 What a difference nine months makes in a volatile economic environment. When it comes to the cost of advertising, the difference represents nearly a percentage point increase in inflation, according to new estimates released by ECI Media Management this morning.

Citing increases in overall economic inflation, ECI now projects North American ad costs will rise 6.2% this year -- up from the 5.4% it projected in February.

For the global marketplace, ECI now estimates advertising costs will rise 5.2% -- up from the 4.5% it projected in February.

“Consumer confidence grew at the start of 2022 as the world economy started to bounce back after the global pandemic, and media prices were no exception," ECI Global CEO Fredrik Kinge explains, adding: "In North America, media inflation rises were driven predominantly by CTV and online channels. But what we are seeing now is even higher inflation, fueled by the after-effects of the pandemic, the war in Ukraine, rising fuel prices and the very real threat of a recession.

“Furthermore, the U.S. is preparing for mid-term elections in November, which will see spend on political advertising rising to an estimated $9.7 billion, having already surpassed total spend in the 2018 and 2020 election cycles. This will have an impact on both national and local advertisers. It is therefore vital that advertisers understand the transparency and effectiveness of their investments in order to drive higher media value.”

U.S. ad price pressure appears to be most acute for television, which will inflate 13.4% this year, while online video prices will soar 8.2%, due in large part to surging demand and limited inventory for connected TV (CTV) advertising.

"Meanwhile, print continues to be deflationary," ECI's update says, noting that is "in line with initial expectations." 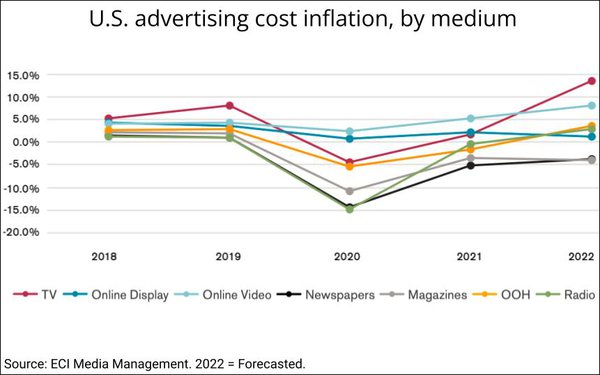