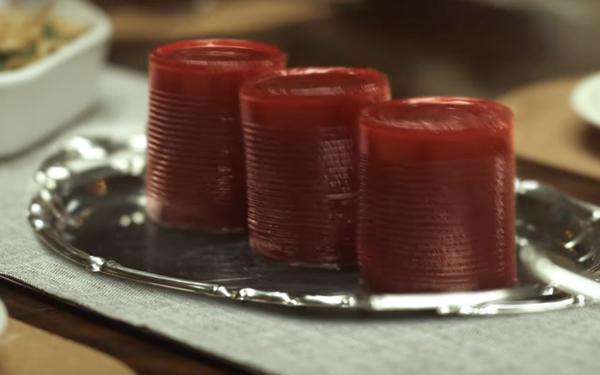 How do you try to move cranberry sauce from a side dish to a center-table, holiday table attraction?

In the case of Ocean Spray, by making it wiggle wildly to its own dance track created by Mack Goudy Jr.—AKA Paris The Black Fu—one of the founding members of The Detroit Grand Pubahs music group.

This 60-second spot begins with six bored-looking people gathered at a table laden with the usual turkey, pumpkin pie and other foods. The only sound is that of a ticking clock.

Things change abruptly when a man walks in with a dish bearing three logs of Ocean Spray cranberry sauce that start to wiggle.

After a few seconds, the bewildered diners also start to wiggle and jiggle uncontrollably in their seats as boredom is replaced by a full-out party scene.

“There’s something hypnotic and captivating about watching jelly jiggle. It’s hard to be mad when you see it. We took that truth and followed it to its illogical conclusion,” Orchard Creative CCO David Kolbusz said in a news release.

“Ocean Spray has always been about bringing joy to the holiday with the power of cranberry,” a brand rep tells Marketing Daily.

“This year, we simply wanted to create a story that celebrates that power in a fun way. We’re just having fun putting some extra joy out into the world.”

In addition to the campaign spot running on television and digital platforms and a media partnership with Vox, the song will be available on Spotify this month.

The Detroit Grand Pubahs are best known for their 2000 single "Sandwiches", which reached #29 on the Dance Club Songs chart.

Ocean Spray is an agricultural cooperative owned by more than 700 farmer families.