Anti-Semitism In The News As HBO Doc Remembers Synagogue Massacre 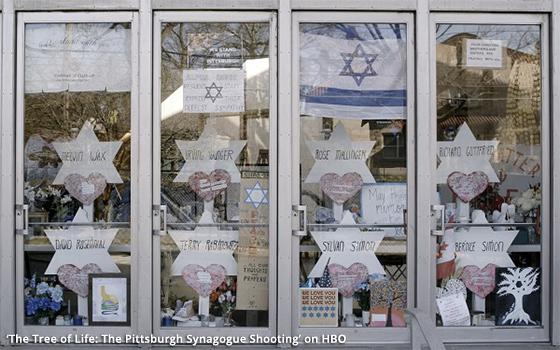 Just as an HBO documentary about the massacre at a Pittsburgh synagogue four years ago is set to premiere today, anti-Semitism is back in the news, thanks to Kanye West.

The documentary is titled “Tree of Life: The Pittsburgh Synagogue Shooting.” The film is about the incident in which a gunman entered the L’Simcha (“Tree of Life”) synagogue with an assault rifle and killed 11 congregation members on Saturday, October 27, 2018, as they took part in Shabbat services.

The gunman, who survived a barrage of bullets by local law enforcement, had reportedly posted anti-Semitic messages and statements on an obscure social-media website.

As this incident is being remembered this week, business partners are severing ties left and right with Kanye West in the wake of the anti-Semitic diatribe he unleashed on a popular podcast posted on October 16.

It is the same ye olde stuff, too. Jews control the media. Jews control all the banks and hence, all global money and investment too.

And one of the victims of this international show business and world banking conspiracy is none other than Kanye West, now known as “Ye” -- rapper, producer, fashion entrepreneur, hip-hop gazillionaire, ex-husband of Kim Kardashian and now, well-known anti-Semite.

Rather than take up space here with West's exact statements and the accusations he leveled at Jews, they are amply covered here on ADL.org and here on Forward.com.

The statements were made in a lengthy interview lasting just shy of 3½ hours on “Drink Champs,” on which two co-hosts from the world of hip-hop, N.O.R.E. and DJ EFN, conduct interviews and, according to some reports, get gradually inebriated at the same time.

The show has been described in most news reports as a podcast but it is characterized as a “show” on the website of Revolt TV, the show's home base. Revolt TV is owned principally by Diddy.

In September, a New Yorker profile of “Drink Champs” gushed with praise for the show. With all due respect to The New Yorker, the story was a puff piece.

It came out before the Kanye West uproar, however, but it described an earlier West appearance in which an anti-Semitic diatribe was not part of the show, or at least if there was one, it was not mentioned.

For some reason, the magazine found it relevant to report that West identified “which of his 24 Grammys he has peed on.”

West's anti-Semitic rant on a podcast (or show) revived memories of Nick Cannon's anti-Semitic rant in 2020 on his own podcast, “Cannon's Class,” in which he made references to “the Rothschilds,” “centralized banking,” “the 13 families” and “the bloodlines that control everything even outside of America …”

Today, Cannon hosts one of the biggest hit shows on Fox, “The Masked Singer.”

In defense of Cannon, radio personality Charlamagne Tha God was widely quoted in 2020 for anti-Semitic statements of his own, delivered on his syndicated radio show, “The Breakfast Club.”

“Listen, Nick is my guy,” he said. “I hate it had to be him, but that's what you can do when you have the power. And if there's one thing Jewish people have showed us, it's they have the power.”

In the same year that he made those remarks, Charlamagne was inducted into the Radio Hall of Fame. A year later, Comedy Central rewarded him with his own talk show.

Meanwhile, the subject of HBO’s “Tree of Life” documentary -- the assault on a Pittsburgh synagogue -- was the deadliest attack on a Jewish community in U.S. history.

This was not an attack from some distant past either. It happened just four years ago.