Slice Of Life And Cheese: Domino's Throws 'Pizza Party Of One' 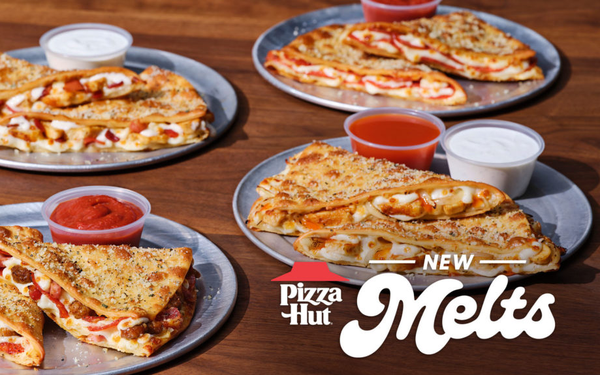 The chain, which previously experimented with slices in 2014, is now offering Pizza Hut Melts, a $6.99 entrée composed of two slices of Thin N’ Crispy pizza folded together, filled with toppings and cheese, complemented by a dipping sauce, creating a calzone-like meal.

“Unlike most pizza dishes, Melts were designed for a pizza party of one, giving guests the option to enjoy the delicious taste of pizza without having to order a whole pie, whenever or wherever they want,” Pizza Hut said in a press release.

One selling point for the idea is speed: unlike Pizza Hut’s whole pies, which can take up to 10 minutes to cook, the individual slices, which require separate ovens, will take three to four minutes to heat up.

In a counterintuitive bit of marketing, Pizza Hut is offering some guests $100 if they sign an “MDA” (Melts Disclosure Agreement) that they will not share images of Pizza Hut Melts on their social media channels.

Pizza Hut’s experiment with slices in 2014 failed to expand beyond a test at a few locations. The chain has found more success by adding different pizza toppings and crusts, including Spicy Lover’s Pizza, a limited-time offering that Pizza Hut rolled out earlier this year.

The effort comes as Pizza Hut reported a 3% loss in global sales in its most-recent quarter.