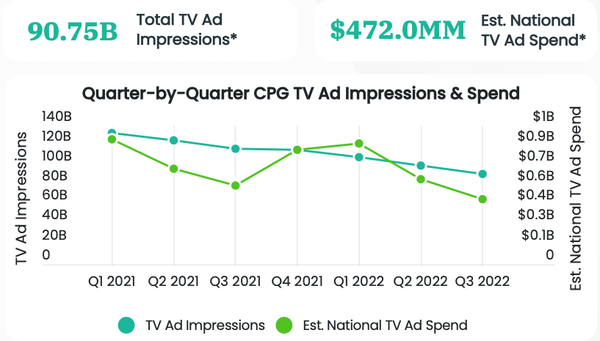 National television ad spending and impressions for CPG advertisers declined for the third consecutive quarter this year, according to data from iSpot.tv.

Among the top 10 brands by total ad impressions, six were in household and personal-care products—led by Procter & Gamble’s Downy fabric softener at #1.

Q3 spending dropped 23.5% to $472 million compared to $617.2 million in the second quarter for live and new programming tracked by i.Spot.tv.

Total Q3 impressions for CPG brands were 90.8 billion compared to 99.9 billion in the second quarter.

A year ago, Q3 spending was $569.8 million—nearly $100 million higher than this year—while impressions were 26.1 billion higher.

Among the notable moves in the third quarter was pet products brand Blue Buffalo’s appearance among the top 10 brands—at #9—with a 32.9% increase in impressions from Q2 aided by more airings on morning talk shows like “Today” and “Good Morning America”.