'We Are Family' Recruits Home Health Aides For Premier Agency 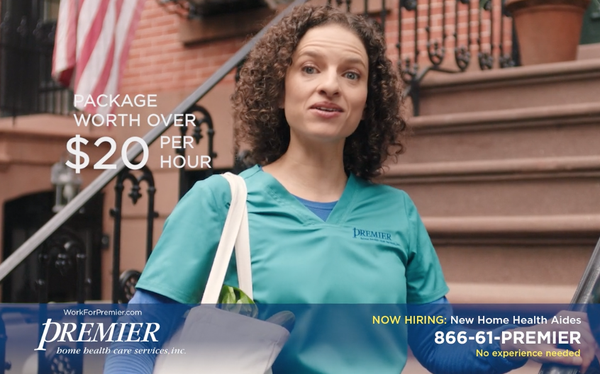 To convey the message that working at Premier Home Health Care Services is like joining a family, the health agency -- or rather, the agency’s ad agency, EGC Group -- licensed the 1979 Sister Sledge hit song, “We Are Family,” for use in a multimillion-dollar recruitment ad campaign running in the New York City market through year’s end.

But where did Premier come up with that kind of money?

The federal American Rescue Plan (AKA the COVID-19 stimulus package), which passed in 2021, provided billions of dollars in funds to strengthen the home healthcare workforce, which the U.S. Department of Labor projects will grow 25% over the next 10 years, averaging 711,700 job openings annually.

Premier was one of 235 home healthcare agencies to receive a share of that federal funding via New York State’s Medicaid program.

Unfortunately, due to EGC’s licensing agreement for “We Are Family,” we’re not allowed to show you the 30-second TV spot here or even link to it.

So, we’ll do our best to describe the commercial here:

First, imagine you are hearing “We Are Family” (that's a link to the music video) by Sister Sledge in the background.

Then you’ll see, one by one, five different female Premier health aides, mostly interacting with patients.

Each of these women delivers a single line or two of the spiel on Premier as an employer, beginning with the vibe: “They say a good home healthcare worker is like family”  mentioning the pay -- a “package worth over $20 an hour” and benefits: “At Premier, we offer flexible hours; that lets me keep an eye on this one,” says a woman standing next to a young child.

The last line: “So, if you’re ready to do important work and be valued for it, join the Premier family, and call 866-61-PREMIER.”

“The messaging works for both recruitment and an overall positive feeling about home care,” Rich DeSimone, EGC’s vice president, creative director, said in a press release.

EGC says that since the campaign launched in August, Premier has since received a record number of calls and online registrations from people interested in working for the firm.

“Using the song ‘We Are Family’ was a great way to capture people’s attention in a fun, memorable way,” DeSimone explained. “People love the song. Everyone always gets up and dances to it. It has a great vibe and energy."

This isn’t even “We Are Family’s” first time supporting health-related causes.

In 2020, Sister Sledge’s Kim Sledge and the nonprofit The World We Want teamed up on a new video of “We Are Family” to aid the WHO Foundation’s COVID-19 response efforts.