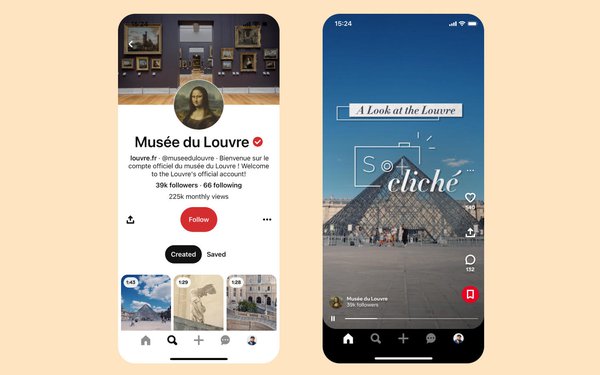 Pinterest and the Louvre Museum partnered to create the original series, A Look at the Louvre.

The partnership expands on Pinterest’s strategy to create and stream original content, and follows a partnership with Tastemade announced in June that slated 50 new shows.

Johan Gipch, Content & Creator Partnerships, Southern Europe at Pinterest, believes that the company’s original production strategy will partner with “the most inspiring creators and partners for our audience, always looking for new experiences.”

Art is one of the most popular categories on Pinterest. The original series aims to offer a new experience of the Louvre -- not only as a source of inspiration, but also as a place to explore, according to Gipch.

The sixth annual Brand Disruption Study -- Brand Disruption 2023: The IAB Annual Report on the Evolving Consumer Ecosystem – looked into the role of social media and the creator economy, among other topics.

It examined the effects of change in consumerism, supply-chain management, distribution, digital selling, and digital marketing to show the role that original content will take across the industry in the coming years, from social media to the metaverse.

Pinterest’s series with the Louvre offers a unique perspective on the museum through a series of videos that share masterpieces and architecture.

It also offerss a view into unusual places on the grounds, including beautifully designed ceilings and views from the windows.

Pinterest’s goal is to develop a network of creators and content production to accelerate live streaming on Pinterest. In the coming months, the company plans to introduce more original programming in categories such as cooking, travel, decoration, and more.

Content creators at Pinterest and Louvre Museum create the videos in French and English and will be posted on Pinterest’s Daily Inspiration page in France, Italy, Spain, the United Kingdom, Japan, and the United States. Five videos that looks at the art, the windows, everything but the Mona Lisa, and more will be published next year.

The Louvre has aligned with French history for eight centuries. Conceived from its creation in 1793 as a universal museum, its collections, which are among the world’s finest, span several millennia and a territory that stretches from America to Asia.

Pinterest invested in its content-creator community by introducing new tools that allowed them to make money from their content. Last year it enabled creators to tag products in their Idea Pins, a video feature, to make their content shoppable.

It's not clear whether this additional content strategy with the Louvre and Tastemade, and others to come, will provide an additional revenue stream for the company.