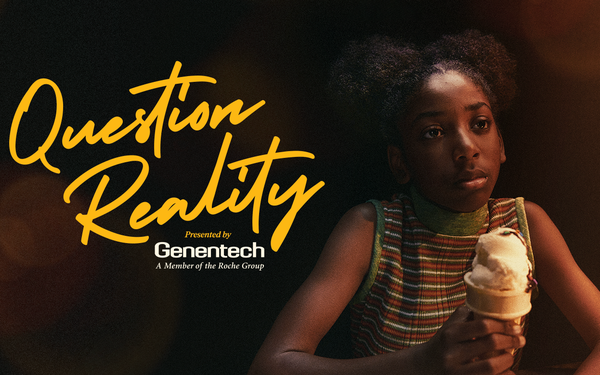 Developed with Goodby, Silverstein & Partners, the campaign is “bringing the entire system into question about the current racial inequities…and demanding critical change,” Veronica Sandoval, Genentech’s principal, Patient Inclusion and Health Equity, tells Marketing Daily. “It highlights a clear call to action. Health inequity is a crisis, and it is time that we change this reality and invest in systemic solutions.”

This campaign is running in consumer media: broadcast television, social media and other digital platforms, and at high-profile events and meetings with policy makers and health care industry peers.

Campaign elements include videos, print ads and digital assets, with a key 60-second spot showing a Black girl asking questions as she grows onscreen into a woman.

First, she asks, “Why didn't the doctor believe me? Did I say something wrong?”

Then, as a med student: “What if they actually gave us access to those clinical studies we learned about? And those cutting-edge medicines? How many lives would that save? How much longer will we live?”

And finally, she becomes a professional woman at Genentech itself: “What if we asked the bigger questions and really tackled the root causes of systemic inequities in healthcare?”

Meanwhile, viewers see a few onscreen statistics, such as “Black women are 41% more likely to die from breast cancer.”

“We know that statistics alone don't move us with the same power as human stories,” Sandoval explains “So ‘Question Reality’ pairs powerful statistics with the human impact of a system that is still failing the most vulnerable.”

The campaign aims “to awaken people to reality but not in a way that paralyzes them with despair. Instead, in a way that stirs them to action. That makes change feel both urgent and possible.”

This isn’t the first time that Genentech has posed questions in its marketing. “Question Reality” is an extension of Genentech's corporate brand marketing campaign, “Ask Bigger Questions,” created by Goodby Silverstein in 2021 that Sandoval notes is based on “the truth that scientific breakthroughs always start with a question.”

And it isn’t the first time that the company has addressed health inequity. Sandoval cites a recent campaign for its multiple sclerosis (MS) drug Ocrevus, which took into account that Black and Hispanic/LatinX people make up a combined 35% of the MS population, but account for only 13% of the those being treated for the disease. So a Spanish-language consumer spot that was part of the campaign.