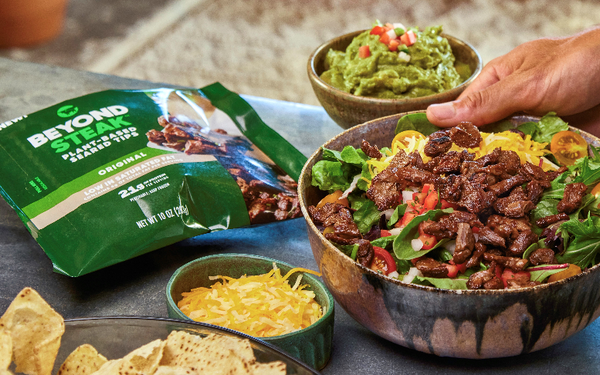 Beyond Meat and Impossible Foods are pushing the boundaries of plant-based meat substitutes with steak tips and filet mignon.

On Monday, Beyond Meat announced the launch of seared steak tips -- trademarked Beyond Steak -- at more than 5,000 Kroger and Walmart stores nationwide.

Two weeks ago, Impossible Foods founder Pat Brown said the company has created prototypes of plant-based filet mignon, but did not specify a date for their launch, as reported by MIT Technology Review.

Beyond Steak is sliced to replicate whole pieces of meat as opposed to Beyond Meat’s imitation sausages, chicken tenders, burger patties and meatballs.

It’s positioned as a convenient-meal ingredient that can be prepared in a skillet or air fryer in five minutes and added to things like fajitas, tacos, stir fries, sandwiches and salads.

Beyond Steak is the latest addition to Beyond Meat’s flagship plant-based beef portfolio at retail, consisting of Beyond Burger, ground Beyond Beef and Beyond Meatballs.

In addition to Kroger and Walmart, Beyond Steak is available at select Albertsons and Ahold divisions along with “other retailers across the country,” Beyond Meat said in a news release.

As with other plant-based meat alternatives, achieving the right texture is a key goal—requiring Impossible Foods to adjust its process for producing ground beef to re-create the structure of steak, according to Brown.

Marketing Daily reached out to Impossible Foods for confirmation of the filet mignon initiative, but had not heard back by deadline.

The news comes as food-price inflation continues to crimp the adoption of plant-based foods.

On Oct. 14, Beyond Meat said it would cut approximately 19% of its workforce while seeking to become cash-flow positive—meaning more money coming in than going out—within the second half of 2023.

That followed the abrupt departure of COO Doug Ramsey following his arrest on assault charges in September.

Beyond Meat’s stock price has dropped by more than 80% in the past year.