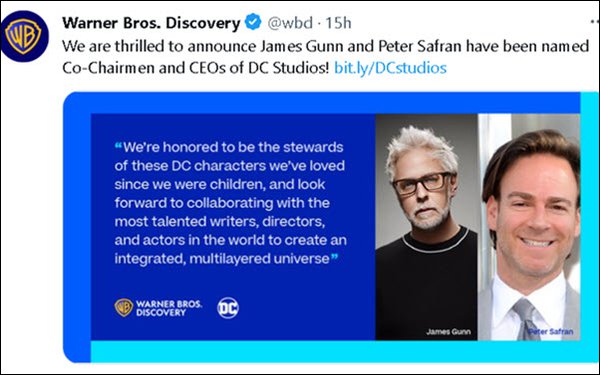 After a months-long, closely watched search, Warner Bros. Discovery (WBD) has chosen James Gunn and Peter Safran to be co-chairmen and CEOs of DC Studios.

The choice is being described as a bold and perhaps somewhat risky one for WBD CEO David Zaslav, whose post-merger efforts to deliver for investors will depend in no small part on rejuvenating and expanding the iconic DC superhero franchise to achieve a level of success on par with Disney’s lucrative Marvel Studios franchise.

Zaslav has promised some $3 billion in cost savings, but this week reported that getting there may cost $1.5 billion, including as much as $4.3 billion in pretax restructuring charges through 2024.

In August, Zaslav declared his intention to “reset” DC with a 10-year plan implemented by a new team.

Gunn and Safran, set to start in their new posts Nov. 1, will oversee the overall creative direction of the DC Universe across film, TV, and animation under a single banner. They will report to Zaslav and work closely with Warner Bros. Film Group co-chairs/CEOs Mike De Luca and Pam Abdy.

The executives have significant experience with the superhero genre, spanning both the Marvel and DC cinematic universes.

Writer/director/producer Gunn was the first to direct both DC Extended Universe (DCEU) and Marvel Cinematic Universe (MCU) films. Gunn spearheaded Marvel films including “Guardians of the Galaxy” and its “Vol. 2” sequel and DC’s “The Suicide Squad” and its HBO Max spinoff series, “Peacemaker.”

Safran has produced numerous films for Warner Bros., New Line Cinema and other studios, including DC’s highest-grossing movie, “Acquaman” and its upcoming sequel, “Shazam” and its upcoming sequel, “The Suiciden Squad,” “Annabelle” and the entire Conjuring horror franchise to date. The Safran Company recently reupped its long-term production deal with WBD, and has four theatrical releases scheduled for 2023, including the sequel to the highest-grossing Conjuring title, “The Nun.”

Still, the new DC Studios heads are taking on a daunting challenge. (WBD reportedly had discussions with others,  as well, including Dan Lin, producer of “The Lego Movie."*)

Also, Gunn has a reputation as a maverick with a brash approach that could ruffle other filmmakers’ feathers. In 2018, he was fired (but rehired after an apology) from the “Guardians of the Galaxy” franchise for making jokes on social media about the Holocaust and pedophilia, among other topics.

Reports have speculated that Gunn appeals to Zaslav because he wants a strong personality with a clear vision for DC, akin to Marvel Studios President Kevin Feige.

In Gunn, Zaslav “has found a renegade (and at one point, incendiary) filmmaker who is steeped in geek culture and has demonstrated flair for coloring outside the lines without alienating mainstream audiences,” summed up Variety.

*Correction: The story originally stated that Lin had declined to accept the job. WBD denies this.