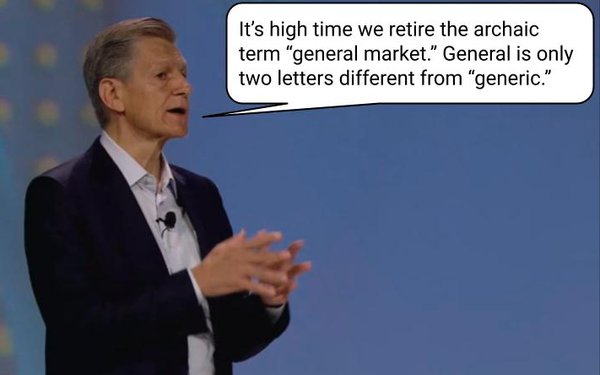 ORLANDO -- While he didn’t call it a bait-and-switch, Procter & Gamble Chief Brand Officer Marc Pritchard took a last-minute "pivot" after reading the room Tuesday as the world’s top marketers gathered for the opening day of the Association of National Advertisers’ annual conference, and substituted an opening keynote about "creativity" with one about a more inclusive approach to advertising and media buying.

Pritchard -- who has been at the forefront of calling for these changes for several years now, and has led P&G's own shift from general-market advertising into campaigns and media strategies targeting explicit cultural, ethnic and racial segments of the consumer marketplace -- acknowledged that he has given similar speeches at a variety of industry media diversity events, but that it was high time he delivered it at the ANA's annual "Masters of Marketing" conference here.

In fact, he called on all marketers to "break the habitual mindset that there is a general market" -- a term and concept that many mass marketers have historically used as an excuse for not explicitly targeting minority audiences -- mainly because they already reach them as part of a "general market."

"It's high time to retire the archaic term 'general market'," he said, adding: "'General' is only two letters different from 'generic.' And our job is to be distinctive, not generic, not average, not homogenous."

Pritchard called on marketers to abandon their general-market orientation in every regard, including consumer research, creative executions, minority representation in ads, and media-buying segmentation -- advocating a big shift from general market media to media targeted explicitly at minority audiences.

In fact, he even called for an end to media plans based solely on national average consumer reach and replace them with ones delivering explicit minority audience reach.

"To reach people with our marketing and ultimately convert them to purchase, we need to break the media reach habit that goes something like this: 'Well Marc, my brand is already reaching Black consumers with our general market media buy. In fact, we're reaching 63% of Black audiences vs. the national average of 60%. We're good.'"

"Well, my question back," he continued, "is why are there market share gaps if you're reaching more than the national average? Why is 63% considered good? Why can't we reach 90% of Black consumers?"

Pritchard ended his keynote explaining that he substituted his presentation after sitting "with hundreds of CMOs and media partners" on Tuesday to discuss the lack of progress the industry has made after 20 years of talking about more diverse consumer marketing and media-buying.

"Someone actually said, 'Why do we even have a Multicultural Conference, right? Why wouldn't that be the [Masters of Marketing] conference," he recalled, explaining that's when he decided, "Let's make a pivot."