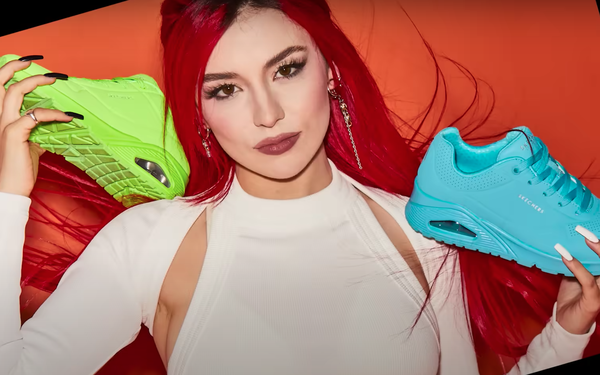 Skechers has done it again, posting record sales and nabbing high industry honors for its performance. And while it cites high-impact celebrity marketing with its sales gains, it missed earnings expectations. The comfy-sneaker kingpin is now forecasting a relatively subdued quarter.

Sales at the Los Angeles company jumped 21% to a record $1.88 billion in its third quarter, with growth in every geographic region. Wholesale revenues climbed 26.2%, and direct-to-consumer purchases advanced 12%.

The company credited the gains to both innovations, including its hands-free slip-ons, and smart marketing with a diverse team of brand ambassadors.

But it gets just as much endorsement oomph from ads with non-jock celebs, including TV personalities Martha Stewart, Amanda Kloots and Brooke Burke, and musicians like Ava Max, Willie Nelson and Chesca.

But net earnings fell 17% to $85.9 million, from $103.1 million in the comparable period last year, partly due to increased marketing spending and supply-chain woes.

And it’s now predicting sales of between $1.725 billion and $1.775 billion in the current quarter, somewhat below expectations.

Gabriella Carbone, who follows the company for Deutsche Bank, continues to rate Skechers as a buy, noting that its lower-than-expected earnings stemmed from logistics costs and strong demand.

“Significant improvements in transit times along with strong demand led to capacity challenges and ultimately higher costs, as Skechers worked to mitigate the impact to customers,” she writes. “This involved adding more labor and capacity to fulfill orders.”