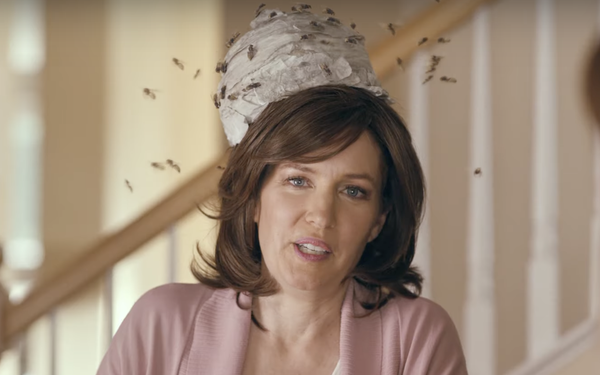 How bad is it to live without home Internet in 2022? This new Xfinity ad posits that it’s like living with a hornet’s nest on your head.

In the ad, via Goodby Silverstein & Partners, a woman explains that the other day, a hornet’s nest fell on her head. “It’s not ideal, but we’ll manage,” she says as the hornets buzz.

She keeps insisting how “It’s not that bad,” but others don’t agree, like her son, who refuses to kiss her goodnight.

At the end, an announcer states that “It is that bad,” and makes a pitch to switch to Xfinity.

In another ad, a man walks around with a bear trap on his leg, again insisting that it’s not that bad. When the man jumps into a kiddie inflatable pool and pops it with his trap, a caption reads, “It is that bad.”