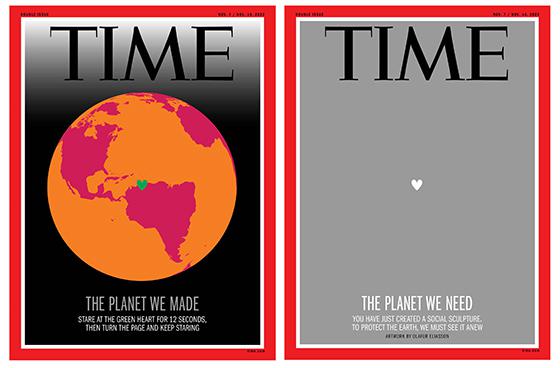 Time magazine has released its first interactive cover to draw attention to the climate crisis as the COP27 conference approaches.

Designed by Olafur Eliasson, there are two cover images. One is headlined The Planet We Made,” and shows an overheated globe with a green heart at the middle.

Readers who push the green heart see a blank gray page with a white heart at the center, saying, “The Planet We Need.”

“When the viewer flips to the blank page after staring at the heart for 12 seconds, they can  ‘re-imagine our overheated planet in the greens and blues that are the colours of a healthy earth,’ Creative Blog writes, calling the cover “one of the best optical illusions of all time."

It adds, “As Time puts it, the new issue’s cover is "the first one where the viewer’s eyes create the image.”

The image(s) accompany a feature titled “The Selfish Case for Climate Justice,” by Justin Worland.

Worland writes of the global problem, “The annual U.N. climate conference—known this year as COP27, and to be held this November in Sharm el-Sheikh, Egypt—offers an opportunity to embrace the reality that when it comes to climate, helping poorer countries helps everybody.”