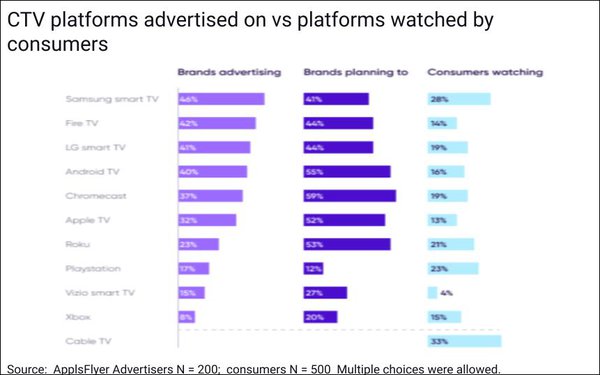 Marketers may be under-using some types of connected TV (CTV) platforms and content genres, according to a new survey commissioned by mobile marketing analytics and attribution platform AppsFlyer.

The survey, conducted in August and September by Global Surveyz Research, spanned two groups: 200 director/C-suite marketing/martech executives from gaming, retail and fintech companies, and 500 consumers between 26 and 50 who watch CTV. Respondents in both groups were from North America, Europe and APAC, with 24% of advertisers and 36% of consumers from the U.S. The marketers asked to participate have all built mobile apps and have run (64%), or plan to run (36%), CTV campaigns to drive mobile conversions. They were recruited through a global BtoB research panel and invited to respond via email.

Based on consumers’ reported usage, CTV advertising investments within this group of marketers, at least, appear to be somewhat over-weighted to smart TVs and under-weighted to gaming consoles such as Playstation and Xbox. (Chart top of page.)

Additionally, these marketers’ investments by content genre do not necessarily align with the proportions of consumers watching  the categories. 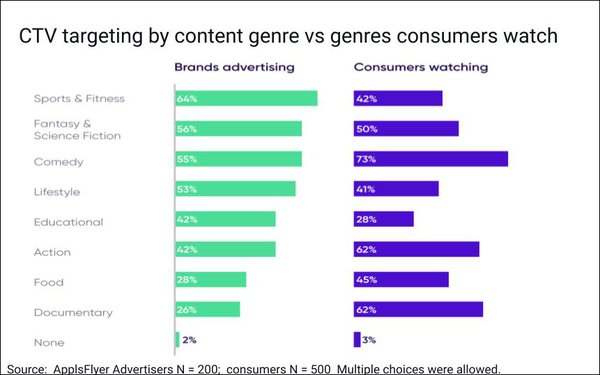 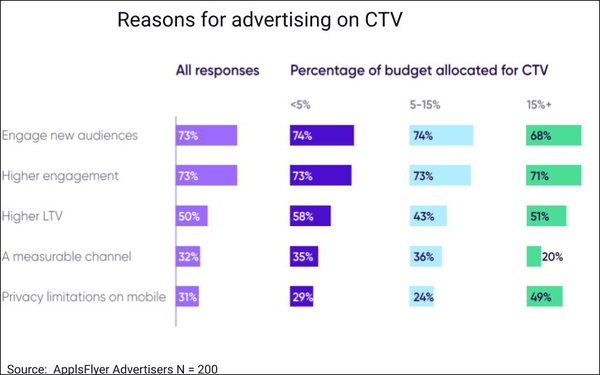 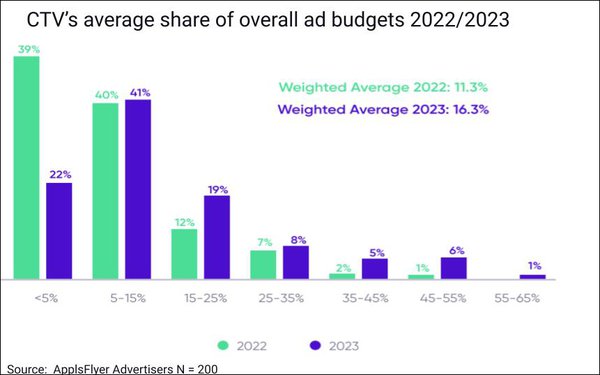 The top KPIs that brands aim to improve when advertising on CTV are return on advertising spend (ROAS), lifetime value (LTV) and retention. The top KPIs among those with the highest percentages (15%+) of advertising budgets already allocated toward CTV are cost per install (CPI), ROAS and LTV. 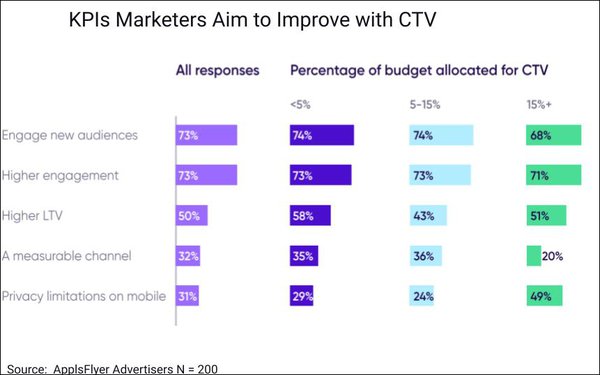 Interestingly, although the advertisers surveyed are marketers of mobile apps, nearly all of them (except 2%) indicated that they believe that ad spend in CTV will eventually surpass spend in mobile. Thirty-seven percent think that will happen within three to five years, 25% within two to three years, and 36% predict it will happen “one day.”

Queried about use of QR codes, 38% of marketers reported that the codes work well for driving mobile app installs, and 26% said they don’t perform well. Another 33% indicated willingness to test the codes.

Eighty percent report watching CTV on TVs, 70% on mobile phones, 46% on desktop/laptop and 36% on tablet.

On average, consumers said they’re fine with watching 1.7 ads within 30 minutes of content. But if the ads are relevant, this sample of consumers claim they would be willing to watch 5.8 ads on average during that short viewing timeframe.

On average, consumers reported watching 5.3 hours of streaming content on CTV per week. In North America, the average is 11% higher, at 5.9 weekly hours.

Forty percent overall overall (and 50% in North America) said they’ve downloaded mobile apps after seeing ads for them on CTV.

More than half said they are quite likely (40%) or very likely (13%) to do this using QR codes, versus 28% and 19%, respectively, saying that they are not very likely or not at all likely to do so.