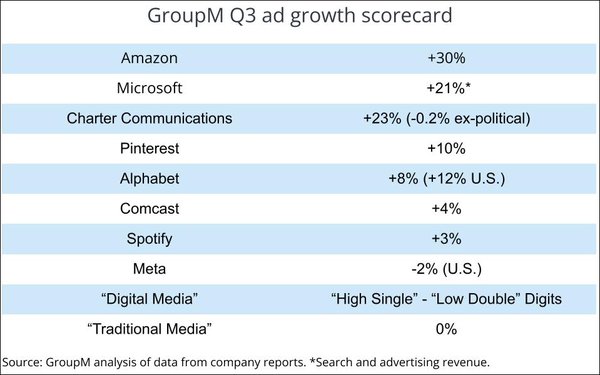 With a little more than a month before the Big 3 agency forecasting units release their year-end outlooks amid weakening economic signals, GroupM at least appears to be standing pat.

"We still end up in the mid-single-digit growth rate for this quarter and nothing that is inconsistent with what we published at the beginning of this year," GroupM Global President of Business Intelligence said in this week's edition of the "This Week Next Week" podcast he co-hosts with Kate Scott-Dawkins.

They added that their view moderate gains for ad spending also remain consistent with their mid-year update in June, and that the most recent data they've been analyzing from public media company earnings reports reaffirms that view.

The GroupM team utilizes a bottoms-up approach to ad forecasting based on what major media companies report publicly, and the team maintains a composite analysis throughout the year to help them with that.

This week's podcast is based on last week's earnings calls, which they noted included releases by four of the ad industry's top five media suppliers -- Alphabet, Meta, Amazon and Comcast -- and that the ad revenue data they disclosed for the third quarter represented about half of all ad spending.

While the ad revenue they reported was mixed -- ranging from a 30% year-over-year increase for Amazon to about a 2% U.S. decline for Meta -- Wieser's back-of-the-envelope analysis was that digital ad spending probably rose in the "high single" to "low double" digits, while traditional media likely was flat.

The team also noted that many top marketers, including consumer packaged goods, continue to report strong sales and have sent signals of increasing their ad spending, not cutting it back.

And while GroupM has continued to make a point that advertising has increasingly become disconnected from the general economy, they cited last week's healthy GDP growth, strong consumer balance sheets, and employment figures as good signs for the economy.

"I think by now, that most of Wall Street understands, and I hope most people in the industry understand that we are not currently in a recession," Wieser said, adding, "The problem is an anticipatory thing."

The team did harp on some individual company results, especially Meta, which attributed a $500 million advertising hit attributed to the weak economy and its transition to its Reels short-form video advertising format (intended to compete with TikTok), which Wieser scoffed at.

Asserting that advertiser budgets are "kind of independent of the inventory," Wieser said, "it strikes me as hard to imagine that $500 million did not show, because they changed their format."

Noting that Meta's stock also took a huge hit after it disclosed humongous, long-term capital expenditure costs associated with its development of a "metaverse," Wieser and Scott-Dawkins pointed to something Meta could get a much better near-term return-on-investment with: "a new probalistic ad attribution model," the lack of which one securities analyst estimated has cost Meta "$10 billion" in advertising revenue.

"Kate, for $10 billion could you build a decent attribution tool and then make sure all of Madison Avenue knew about it and bought it, even if you gave it away," Wieser chided co-host Scott-Dawkins, adding that it was a great question posed by the securities analyst, but that "We didn't hear it as loudly as we heard the protests when Apple" began phasing out its ad IDs as part of its consumer privacy framework over the past couple of years.