When Madison Avenue Freezes Over 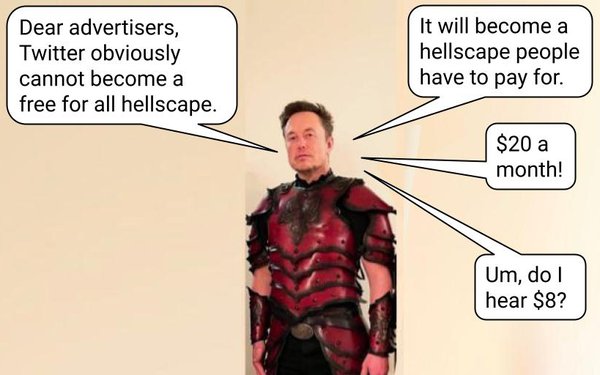 If I could be a fly-on-the wall at big agency meetings this week, I’d want to be present to hear Elon Musk make his hellscape pitch to Madison Avenue’s top media-buying brass.

Don’t get me wrong, I’ve been in the room when megalomaniacal narcissistic billionaires made similar pitches before. But unlike the days when Ted Turner would jump up on boardroom tables to boast about his plans for global domination, Musk’s vision extends well beyond planet Earth, not just under it.

Ted was simply trying to overcome concerns about the new, untried medium of satellites and cable TV and get CNN on the plan. Elon also launches satellites, but that’s just a side hustle. His real goal is simply to reign, even if it happens to be in a hellscape.

And to prove it, he’s already begun using it to torture some souls, decimating Twitter’s content moderation and brand safety teams, amplifying dangerous conspiracy tweets, and keeping us all guessing about if and when he’ll reinstate the banned accounts of other stochastic terror mongers, including  – well, you-know-who.

Kudos to big agencies like IPG Mediabrands, Havas Media, Publicis Media and others who reportedly have already imposed their own bans on buying Twitter, or at least, have recommended their clients put their buys on “pause.”

Kudos too to the Global Alliance for Responsible Media for holding Musk’s feet to the fire, demanding that Musk honor the pledge Twitter made to help make the world a safer place.

But the truth is, I’m not sure Musk really cares, because the world’s biggest advertisers and their agencies are a relatively small part of Twitter’s – or any big digital media platform’s –  business.

We learned this first hand when the biggest advertisers held a boycott of Facebook in 2021 in order to pressure it to clean up its act, only to learn that Facebook’s ad revenues increased, not declined for the quarter.

According to an analysis released last week by Media Matters, Twitter’s top 20 advertisers spent $358 million on the platform through the first three quarters of the year. While those are big bucks, it probably represents less than 10% of Twitter’s advertising revenues.

I don’t have data handy on what the major agency holding companies and their clients spend on Twitter each year, but I’m going to guess it’s something less than half of what it takes in.

As we’ve learned from Google, Meta and Amazon, most of their ad revenue comes from the long tail – small- and medium-size businesses -- many of whom don’t even have an ad agency, but buy directly off the platforms self-serve interfaces.

Don’t get me wrong, big advertisers and agencies hold some sway with the platforms, but unlike the days when Ted Turner would poor his guts out for make-or-break deals to get cable on the buy, it’s just about the margins for Elon Musk.

Look, I’m not smart enough to understand what his long play is for spending $44 billion on it. And maybe it’s just pocket change to him and that all he really wants is the ability to teleport into your soul, on-demand, when the mood suits him.

And whether you’re on Twitter or not, he has that, because whatever salacious comment he tweets next will get picked up and amplified by news media, and baked into our social fabric by late night talk shows and other social media channels and memes.

He purchased that right.

And the funny thing is he’s actually been incredibly transparent about it, whether it was his hellscape description in an open letter to advertisers, or even last night’s tweet that “Twitter speaks to the inner masochist in all of us.”

A privilege Musk plans to charge users $8 a month for. Which is a bargain compared to the $20 he originally planned to charge.

The funny thing is he may be on to something, because unlike Meta, which derives almost all its revenue from advertising, Twitter generates only 92% from advertisers. The rest comes from licensing data and other products, and adding by adding a subscription model, Musk will be even more immune from the kind of sway big advertisers and agencies could hold over him.

But the real reason I’d like to be a fly-on-the-wall isn’t what Musk will be saying. It’s what big agency exces will say in response to him, coming at a time when they all speak publicly about doing what they can to get rid of harmful content and make the world a better place.