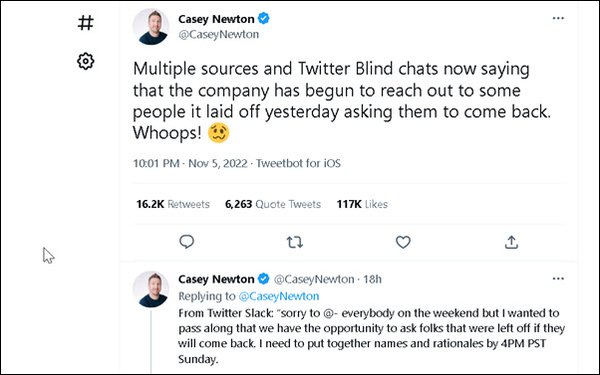 After firing nearly half (about 3,700) of its employees via email last Friday, Twitter on Saturday began asking dozens of them to return, according to Silicon Valley blog Platformer, Bloomberg sources and blind chats on Twitter.

Some were laid off by mistake, while others “were let go before management realized that their work and experience may be necessary to build the new features” envisioned by new owner Elon Musk, reports Bloomberg.

Platformer’s Casey Newton reposted (above) this tweet from Twitter Slack: “sorry to @- everybody on the weekend but I wanted to pass along that we have the opportunity to ask folks that were left off if they will come back. I need to put together names and rationales by 4PM PST Sunday.”

On a separate front, after several celebrities and other high-profile Twitter users made their accounts mimic Musk’s account in order to mock him and/or make political statements, Musk on Sunday posted that “Going forward, any Twitter handles engaging in impersonation without clearly specifying ‘parody’ will be permanently suspended.

“Previously, we issued a warning before suspension, but now that we are rolling out widespread verification, there will be no warning,” Musk continued. “This will be clearly identified as a condition for signing up to Twitter Blue. Any name change at all will cause temporary loss of verified checkmark.”

Prior to acquiring Twitter, Musk said he was against lifetime user suspensions.

After posting the new policy message, Musk responded to critics accusing him of retreating from his declarations about buying Twitter to make it a bastion of free speech by pointing out that he has even allowed a Twitter account that tracks the movements of his private plane to stay up.

He also appeared to shift emphasis, posting: “Twitter needs to become by far the most accurate source of information about the world. That’s our mission."

Twitter’s existing, pre-Musk rules state that users “may not impersonate individuals, groups, or organizations to mislead, confuse, or deceive others, nor use a fake identity in a manner that disrupts the experience of others on Twitter.” They also state that parodists should distinguish themselves in “BOTH their account name and bio.”

Punishments for inadequately identified impersonation could include profile moderation, and temporary or permanent suspension, but the platform “would not usually jump to a permanent ban of a user’s account” for an impersonation, notes  CNBC, confirming Musk's own statement.

The Twitter users who impersonated Musk with their accounts were mostly reacting to his decision last week to give verified “checkmark” status to anyone willing to pay $7.99 per month for a  Twitter Blue account, rather than reserving the status largely for high-profile users most likely to be impersonated.

At least two — comedian Kathy Griffin and actor Rich Sommer, of "Mad Men" fame — had their accounts suspended, although Twitter did not respond to CNBC’s query as to whether those are permanent.

Sommer, while impersonating Musk, faux-tweeted in part: “Ok, time to employ plan B since they’re MAKING me keep Twitter. does anyone know any advertisers who are, like, kind of ‘into’ racism NOT ACTUAL RACISTS!! just ad ppl who are, y’know, curious about what it’s all about (racism).”

Griffin changed her profile and username to match Musk's, then encouraged followers to vote Democratic in Tuesday's midterm elections. After her own account was shut down, she reportedly used her dead mother's account to continue to troll Musk.