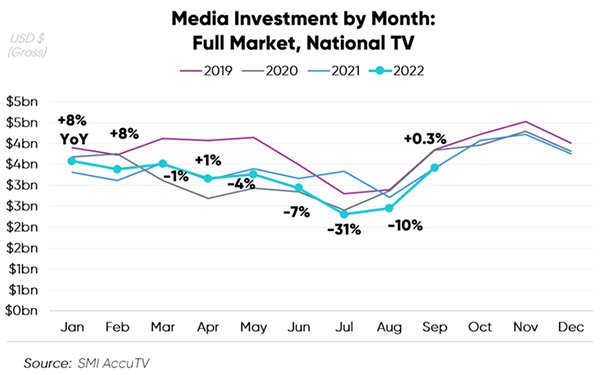 National linear TV advertising remained virtually flat in September -- the start of the new TV season and major sporting events -- versus a year ago, inching up a tiny 0.3%, according to Standard Media Index, to just under $4 billion.

But SMI says this was due to the absence of some key sports events that ran a year ago -- including the Ryder Cup golf tournament.

The positive news came with September reversing a general monthly decline that began in March, which witnessed a 1% slip. This was followed by April’s 1% gain, May's 4% downturn, June’s 7% drop, July’s 31% decline, and August’s 10% pullback.

This data comes from SMI's Pool ad-spend data from raw U.S. media bookings placed and billed from major and independent media agencies amounting to around 95% of all U.S. national brand ad spend.

The full third-quarter period -- July through September -- for all media spend was down 14% versus a year ago and down 10% versus 2020.

Programming categories: Sports was the big loser in the period -- sinking a massive 43% from a year ago -- this from the absence of major live sporting events in the year ago period, including the Summer Olympics, NBA Finals, and the delayed 2020 Ryder Cup golf tournament.

Entertainment (up 1%) and news content (down 1%) were essentially flat.

Media channels: Cable TV networks were down 8%, while broadcast networks were off 24%. Syndication programming rose 15% -- the first time they saw an uptick for the third quarter for the TV business since 2017.