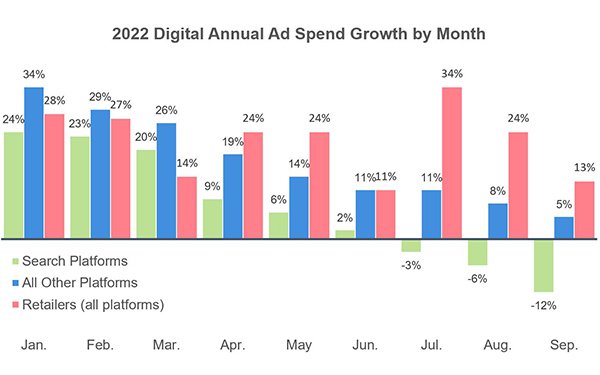 The digital ad industry could be on the cusp of a major transition with the decline of traditional search advertising, trapped in the headwinds of a significant increase in retail search, according to data.

The behavior of searching for a product or service is strong, but the location of where consumers conduct the search continues to change, according to Rick Bruner, head of insight and analytics at Standard Media Index (SMI), which aggregates media billing records from the 11 biggest ad-agency holding groups worldwide.

Bruner pointed to SMI’s September data, with the October data being released mid-month. “We saw the decline for digital media non-search as well as search,” he said. “It went negative for search in July.”

One thing to note, he said, is that spending in 2021 was “abnormally high,” referring to the entire ad market as “overheated.” In November, December, January, and February media buys were up about 20% year-over-year, but that was against the pandemic year, 2020.

Advertisers through agencies are investing money in retail media, rather than traditional search, he said.

In the report, retail media is characterized as “point-of-sale aligned,” meaning that advertisers selling product through retailers such as grocers and consumer product goods (CPG). This includes companies like Albertsons, Amazon, Walmart, and Target, as well as Home Depot, Lowes, and Instacart.

Financial Services, Travel and similar are considered a non-POS aligned, because the sale is made direct.

Advertisers selling through agencies are dramatically reducing their search spend, while the others that are not aligned to sell through retailers are spending 5%, compared with POS-aligned at minus 16%, he said.

In the same grouping, the POS-aligned advertisers are shifting budgets into retail the fastest, he said.

SMI notes that ad spending on retail sites by the POS-aligned group is roughly four to five times as large as that of non-POS-aligned categories. These groups were roughly equal on Search platforms.

The shift shows that more consumers are going to Amazon and other retailers first to conduct searches. On those merchant sites and apps, native search or placement listings complete consumer search intent.

The retailers are very actively courting those ad dollars, he said.

"The consumer experience used to be, you would start your search on Google or Bing, and you would get products sold on Amazon or Walmart, and then they would click again," Bruner said. "Now they just bypass Google, because they expect to buy the product in Walmart or Target is it's there."

SMI also released a series of blog posts on how to plan for a recession, which companies are expecting in 2023, and how media companies can diversify media formats.