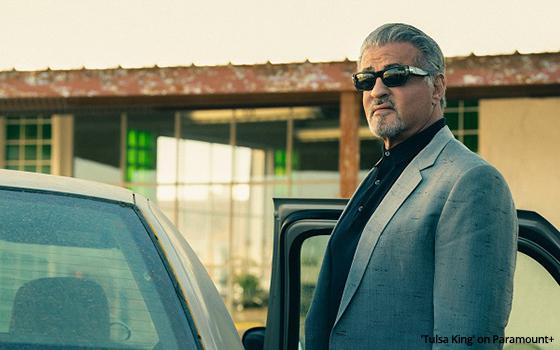 Sylvester Stallone plays a newly arrived wannabe crime kingpin of Tulsa, Oklahoma, but he also establishes himself as a king of TV in the new Paramount+ drama series “Tulsa King.”

He is a star with on-camera presence and charisma to spare. “Tulsa King” is his first-ever TV series and the world of television is lucky to get him.

The success of this series depends almost entirely on the force of Stallone’s performance, which stands at the center of this show.

Fortunately for the show and for us, he is riveting in every scene he is in. For the most part, he carries the whole show on his broad and still-imposing shoulders.

But at the same time, “Tulsa King” has plenty of other assets to support him. These include casting, writing, cinematography, location-scouting and other elements that are all top-notch.

Responsibility for this show’s high quality lies with a cadre of TV veterans. “Tulsa King” was created by Taylor Sheridan, who has emerged as the go-to producer and showrunner for Paramount+.

His other Paramount+ shows (sometimes shared with cable’s Paramount Network) are the service’s most successful series, including “Yellowstone,” its two prequel series “1883” and “1923” (premiering next month), “Mayor of Kingstown” and a possible spinoff of “Yellowstone” that is reportedly in the works.

Alan Coulter, director on “The Sopranos” and “Boardwalk Empire,” directs episodes of “Tulsa King” too.

Stallone, 76 (which is hard to believe when you see him), is the “King” of the show’s title, but as the series starts out, his character -- Dwight David Manfredi -- is not yet the king of Tulsa.

He is, however, a capo in a New York crime family who has been in federal prison for 25 years. When we first meet him, he is being released, after which he meets with the family don in the hopes of resuming his activities from a quarter century ago.

He is informed that times have changed, and his spot has been filled by others. So, the other top men of the organization concoct a plan to send him to Tulsa -- pop. 413,000 -- because they sense opportunities there for someone with his particular skill set.

He realizes he is being banished, but he seeks to make the best of it. Almost immediately upon landing he starts making his presence known in his new city, even stopping to establish a financial “arrangement” with a local marijuana dispensary on the way from the airport to his motel.

These scenes, in which this newly arrived gangster from New York insinuates himself into various Tulsa enterprises, are among the show’s best scenes.

Dwight’s adventures in Tulsa are not without their problems, including: A woman he picks up in a bar turns out to be an ATF agent (Andrea Savage) and a capo back in New York wants to kill him.

Nevertheless, Dwight (who his parents named for Dwight D. Eisenhower) rolls confidently along as he makes business partnerships all over town.

These include the proprietor of the pot dispensary and a cab driver named Tyson, who Dwight hires to be his personal driver.

Played by Martin Starr and Jay Will, respectively, they are standouts in a cast that is full of standouts.

Also look for Max Casella (“The Sopranos”), and Dominik Lombardozzi and Vincent Piazza (both seen in “Boardwalk Empire”).

“Tulsa King” is hands down one of the best new shows of 2022 and a bull’s-eye for Paramount.